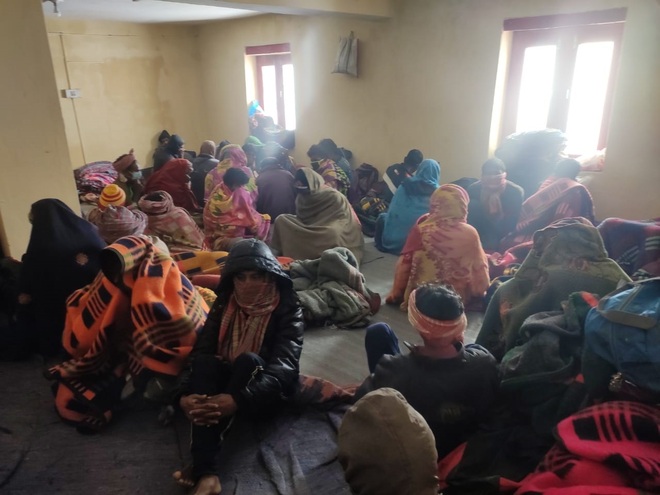 Migrant workers take shelter at a monastery in Lahaul.

Over 200 labourers from Bihar, Uttar Pradesh and Nepal have been stuck in the Todh Valley of Lahaul for the past three days due to snow. The migrant labourers were going to Leh in search of livelihood but they were stuck between Keylong and Darcha.

Deputy Commissioner Pankaj Rai said the people of Gemur village had given shelter to 70 labourers. Around 70 others were given shelter in the Mountaineering Institute Sub-Centre in Jispa. Some had been shifted to homestays. He said some vehicles were also stuck between Keylong and Darcha.

The DC said a team comprising the SDM, a DSP, a BDO, a tehsildar and officials of the disaster management had been sent in five vehicles. The team would ensure the comfortable stay of the labourers and provide them with blankets.

Villagers of Gemur, Dorje Thakur, Jia Lal, Kalzang and Semphel Bodh said they had received information about the labourers. They were provided shelter in a monastery and were provided food by the villagers.