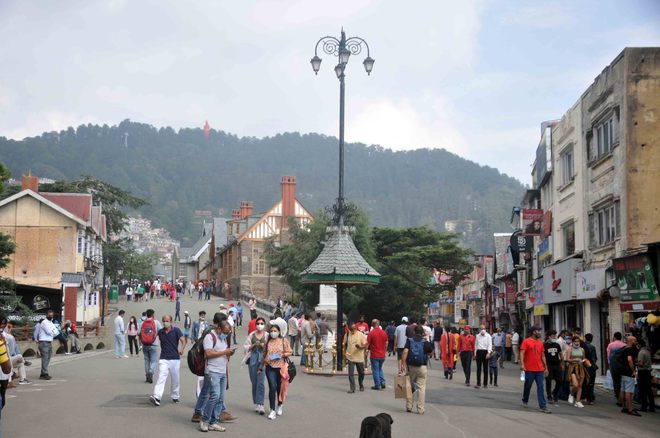 The high influx of tourists into Shimla following the lifting of Covid restrictions has led to a slight shortage of water in the city.

According to Shimla Jal Prabandhan Nigam Limited, the company procuring and distributing water in the Shimla municipal limits, there has been a difference of 2-3 MLD between demand and supply for the past few days. “We are getting around 40 MLD, which is around 2-3 MLD less than what we require at the moment,” said SJPNL AGM Harmesh Bhatia. As a result, the company has done some rescheduling in water distribution. “We are applying cuts for 20-30 minutes as and when required,” said Bhatia.

While the arrival of tourists has pushed up the demand, the weak monsoon has depleted the water level at the source. “We haven’t had much rain in the last 10-15 days, affecting water availability at the source. The water level in Ashwani Khud, in particular, has gone down considerably, from 4.5MLD to 1.5 MLD,” said AGM (Distribution) Rajesh Kashyap.

The company, however, is confident that the gap between demand and supply would be bridged over the next few days. “We are now pumping during the peak hours, which we were avoiding earlier. Also, we are strengthening our monitoring system to ensure that everyone gets equal quantity of water,” said Kashyap.

The SJPNL officials say if the public ensure that there is no wastage of water, they have sufficient water to cater to the needs of the city even during the peak occupancy in hotels.

Besides, the water company is trying to sort out the billing issues, a constant irritant among consumers. “People have problems regarding billing. People are getting arrears despite making the payment, there are problems related to server and gateway. We will soon take up the matter with DIT and HDFC to ensure people get accurate bills and there are no issues related to payments,” said Bhatia.