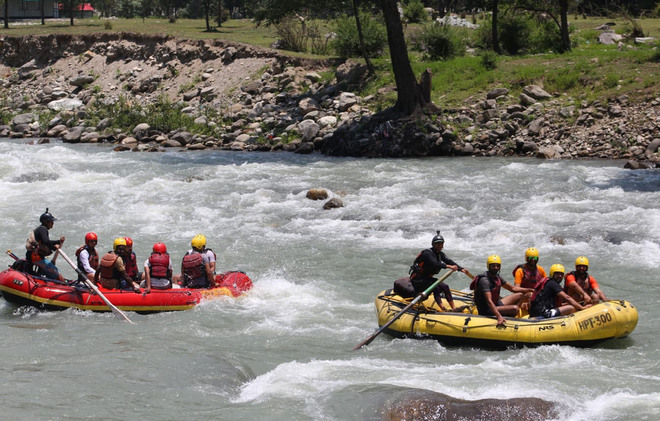 Tourists enjoy river rafting in the Beas in Kullu on Sunday. Jai Kumar

The tourist influx to Kullu-Manali has increased these days, benefiting the tourism industry, which had been on the edge for the past two months.

From July to September, due to heavy rain and flash floods, the room occupancy in hotels had shrunk below 5 per cent.

In view of the tourist safety, the tourism department had suspended the adventurous sports activities like paragliding, river rafting etc till September 15.

Now, the department has resumed the adventurous sports activities in Kullu. A large number of tourists can be seen enjoying river rafting in the Beas and paragliding at the Solang valley near Manali.

According to hoteliers, the queries for rooms have increased and it is expected that in the coming days, it will increase further.

The room occupancy has increased up to 30 per cent in Kullu-Manali. The stakeholders are expecting that the tourist count will increase in the coming days.

Nakul Khullar, MD of Baragarh Resort, Manali, said, “It is a good sign for the industry. As the weather is becoming pleasant, we are expecting good business in the coming days.”

“Now, adventurous sports activities have been resumed. It will attract the tourists in large numbers,” said another hotelier Hem Raj Sharma.

As per official sources, the Kullu-Manali was receiving more than 35 lakh tourists every year before the corona period, while the number of tourists will reduce up to 10 lakh this year.