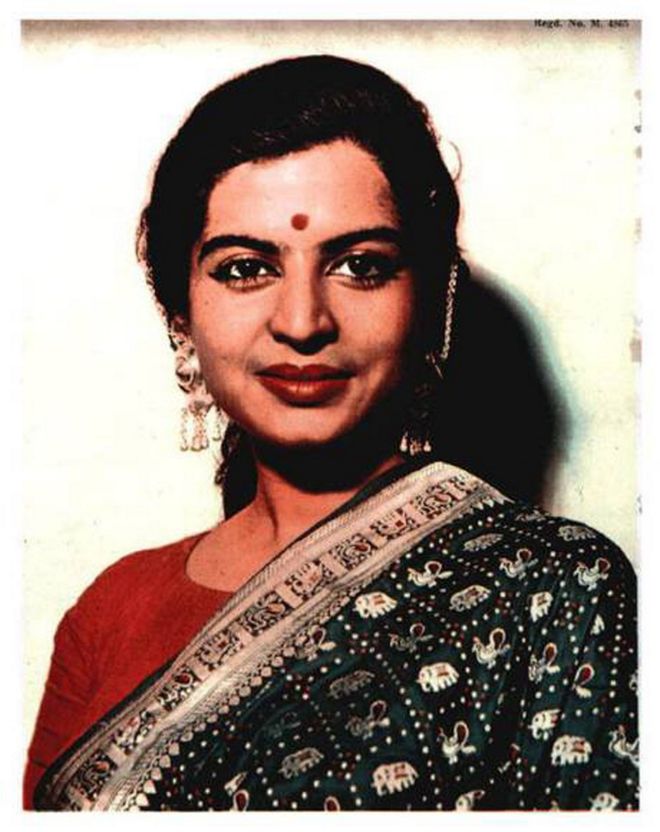 It is the story of Mangal, a taxi driver in Mumbai. He drives a cab throughout day and at night he goes to a club where dances Sylvie, who has feelings for him. One day, Mangal sees that a girl, Mala, is being molested by two thugs. He rescues her and under the pressing circumstances takes her to his ‘kholi’ to let her stay with him. But that is a stud colony and she cannot stay there as a woman, so he shortens her hair, changes her dress and makes her look like a tomboy. Mala also becomes attached to Mangal. But when she imagines that Mangal and Sylvie are sailing together in the boat of love, she runs away from him, finds her mentor, and makes a name and grade as a singer. Finally, Mangal and Mala meet after lots of fight and knife-wielding in which Sylvie gets hurt but saves him from the hands of hoodlums. Yes, it is the story of Navketan’s film “Taxi Driver”, which was screened in 1954.

The second story begins here. Mala’s role was played by Kalpana Kartik, who became Dev Anand’s wife during the shooting of this film. They got married secretly, while having a break. Kalpana was Mona Singha earlier and was born into a Punjabi Christian family at Lahore. Her father was a Tehsildar at Batala in Gurdaspur district. Mona was the youngest of five brothers and two sisters. The family had moved to Shimla after Partition. Mona joined St. Bede’s College here and was a tolerably good student. Those days the Miss Shimla pageant was held at the Cecil Hotel and was later shifted to Davico’s on The Mall. It has now shifted to The Ridge and is part of Shimla’s International Summer Festival. The entry to the hotel was ticketed, probably Rs 100 per person, which appeared quite heavy in those days. But the ticketed persons were allowed to vote for the beauty after their heart. Mona, in 1950, contested for the Miss Shimla crown and came out the winner.

She was noticed by Chetan Anand, a film-maker from Mumbai and brother of Dev Anand, who by chance was there with his wife Uma Anand. Chetan convinced Mona’s family to let her join his fledgling film company, Navketan Films, where she would have the opportunity of becoming the leading lady. Her parents agreed and Chetan re-christened her as Kalpana Kartik. She moved to Mumbai and did her first film “Baazi”, which was a hit. “Baazi” was a gamble that defined the destiny of Kalpana. Navketan, with the success of “Baazi”, had started to spread its wings. Then came the super-duper film “Taxi Driver” in which Kalpana played the lead role of Mala but later after “Nau Do Gyarah” she sacrificed her film career for her family and looked after her son Suneil and daughter Devina. Kalpana, in her eighties, leads a quiet life in Mumbai these days and spends her time in spiritualism and reading old classic literature.

I am now shaking you up to remember Sylvie, the club dancer in film “Taxi Driver”, who breathed style and sensuality to that Anglo-Indian night club. Sylvie’s role was played by Sheila Ramani, who is almost forgotten now. But in the fifties, Sheila Ramani, starting from “Anand Math” in 1952 to “Jungle King” in 1959, gave 23 films and was recognised as a star. Born in Sindh, she was one of the few Sindhi actresses, besides Sadhana, who really made it big in Bollywood. Sheila earned the title of Miss Mussoorie in 1948 and wore the crown of Miss Shimla in 1951. This way film “Taxi Driver” had two ladies, who had worn the Miss Shimla crown, playing the main roles. When Sheila passed away on July 15, 2015, Kalpana had said: “I am grief-stricken to learn that Sheila Ramani is no more. She had made her debut in ‘Taxi Driver’ six decades ago. We did not have many scenes together, but I remember her as a spontaneous actress, bubbling with enthusiasm on the sets. She had a beautiful smile and lips synced the climax song ‘Aye Meri Zindagi’ so well.”

Dev Anand too had a short stint in Himachal Pradesh when he studied at Government College, Dharamsala, for a year (1938-39), as his mother was undergoing treatment for tuberculosis at the sanitorium at Tanda in Kangra where there is a medical college these days.

“Taxi Driver” although showed Mumbai at its best, yet it cannot be denied that the hero and the heroines had, one time or the other, smelled the air of these hills.

Sheila Ramani was the star in India’s first Sindhi film “Abana” (1960) and an unknown teenager, Sadhana, played the role of her younger sister. When Sadhana asked for her autograph, Sheila said that the day would come when she’d ask for Sadhana’s autograph. The prediction came true as Sadhana became one of the great stars of Hindi cinema in the 1960s.