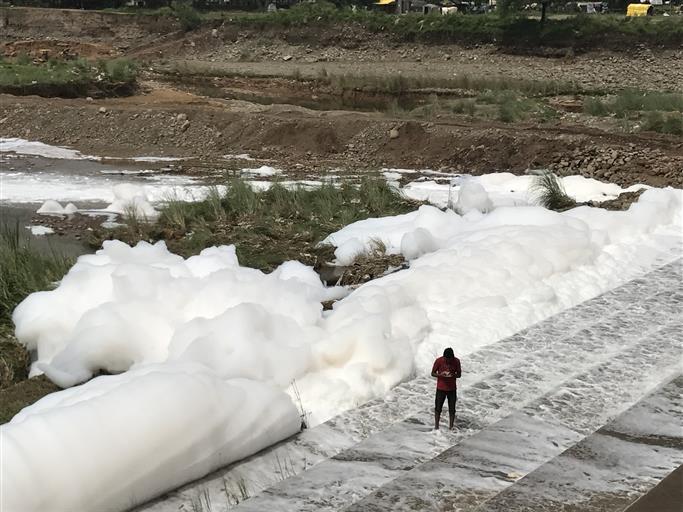 Most of the 2,261 industries in the Baddi-Barotiwala-Nalagarh industrial area are brazenly emitting noxious chemicals in air and dumping toxic effluents in water bodies, making them major health hazards for local residents. As many as 1,983 cases of cancer have surfaced in five years (2013 to 2018) in the area that houses 89 per cent of the state’s industries.

The major polluting industries in the cluster are engaged in the production of textiles, pharmaceuticals, paper, chemicals, bulk drugs, cement, pesticides, and recycling of hazardous waste. They had started their operations here after the Central Government announced a financial package in 2003. Though the financial assistance has transformed the economy of this border area, the deteriorating air and water quality is adversely affecting the health of local residents.

The highest number of 25,462 acute respiratory infection cases has surfaced in the five years, followed by 4,268 cases of bronchitis and 1,399 of asthma. Sourced from the ESIC, Baddi, this health status report of people residing in the Baddi-Nalagarh region in the catchment of the Sarsa river has been compiled by the State Pollution Control Board.

The cases of water-borne diseases are equally appalling — renal infections 15,310 and diarrhoea 7,605. Still worse, 2,656 cases of gastroenteritis were registered from 2013 to 2018, according to the report.

The rising incidence of diseases in the catchment area of the Sarsa clearly indicates that the situation has not improved appreciably though the State Pollution Control Board had chalked out elaborate action plans involving several departments in 2018.

Terminal cancer cases have also emerged in the area. Earlier too, 82 cases of cancer were recorded between 1992 and April 2016 under a study undertaken by a team of experts from the Indira Gandhi Medical College and Hospital, Shimla, in 2017. The study had concluded that 58.5 per cent cancer patients were males. The area mainly reported the cases of cancer of oesophagus, stomach, lungs, lips, oropharynx, larynx, brain, liver, blood and colorectal. The situation has worsened as only a few corrective measures have been implemented.

The study findings gave rise to some pertinent questions. Have the authorities concerned done enough to mitigate pollution? Is pollution a cause for concern to the government?

The area is home to 2,261 industrial units, which are covered under the Water Prevention and Control of Pollution Act, 1974 and the Air Prevention and Control of Pollution Act, 1981. The industries in this industrial cluster have been classified depending on their pollution potential as red (98), orange (931) and green (1,232). Based on the investment criteria, these have been classified as small (1,871), medium (207) and large (183).

The Sarsa is a key perennial river in the industrial area where most of the nullahs confluence. There are numerous surface water channels that carry industrial effluents such as the nullahs in Housing Board Colony, Gullarwala, Barotiwala and Sandholi and Baddi nullah.

The water quality of the river was placed in the ‘priority III’ category by the Central Pollution Control Board (CPCB), as per an assessment based on biological oxygen demand (BoD) — dissolved oxygen needed by organisms to break down organic material and content — released in September 2018. The BoD was found to be between 8 mg and 16 mg per litre as against the safe limit of 3 mg per litre, clearly pointing towards the deteriorating quality of water. Despite numerous efforts no improvement has been witnessed in water quality.

Still worse, Baddi and Nalagarh also figure in the list of 102 non-attainment cities in India, as these have failed to adhere to the National Ambient Air Quality standards prescribed by the CPCB.

The CPCB had revised the standards in November 2009 and 12 parameters were required to be monitored to maintain optimum air quality. The parameters are sulphur dioxide, nitrogen dioxide, particulate matter (PM) 10 and PM 2.5, ozone, lead, carbon monoxide, ammonia, benzene, benzo pyrene, arsenic and nickel. The State Pollution Control Board, however, monitors only sulphur dioxide, nitrogen dioxide and particulate matter. Little has been done to add more parameters in the last 10 years, raising doubts about the intentions of the board to improve air quality in the industrial area.

The abject lack of concern among some industries for the fragile environment of this industrial cluster has come to the fore time and again. In the latest incident, a tanker containing toxic untreated industrial effluents from a pharmaceutical unit was blatantly emptied into the Malpur nullah in the Baddi industrial area on a holiday. The toxic effluents contaminated the nullah, transforming it into a dark blue water body and damaging aquatic flora and fauna.

The fact that the company chose a holiday to dump highly poisonous effluents points towards their lack of concern for the environment and unscientific disposal of effluents to cut expenses. Still more worrisome is the fact that the effluent-laden water from this nullah flows into the already polluted Sarsa river.

The Sarsa river also faces the scourge of pollution as erring industrial units, including the common effluent treatment plant (CETP), do not properly treat industrial waste. The industrial waste finds its way into the river — large scale toxic foam in the river was witnessed in August 2018.

The CETP, which was set up to treat industrial effluents at the cluster level, has also been mired in controversy. The SPCB had imposed a penalty of Rs one crore after a committee of the National Green Tribunal (NGT) found laxity in its operations during a surprise check last year. This has put a question mark over its working.

The area witnesses a scramble among politicians to control waste management. It has been observed that the shoddy management of waste, including open burning of remnants of toxic waste, contributes highly to air pollution. Disposing of toxic effluents into water bodies also compounds the problem as the authorities concerned desist from acting against the violators.

Aditya Negi, Member Secretary of State Pollution Control Board, says several water bodies have been polluted due to dumping of toxic waste. He adds efforts to improve the water quality of the Sarsa as part of a marathon action plan have been defeated. They are trying to implement the plan to mitigate pollution, as per the directions of the NGT.

Baddi is one of the severely polluted industrial clusters identified by the Central Pollution Control Board (CPCB). Its Comprehensive Environment Pollution Index (CEPI), which is calculated on the basis of air, water and land pollution, score is 69.07. The board has failed to bring about any appreciable improvement in this score in the last several years and until the accountability of those at the helm is fixed, things will not improve.

The use of induction furnaces, boilers, and thermic fluid heaters (having particulate matter, oxides of sulphur and nitrogen as pollutants) by the industries is the major cause of air pollution.

Measures undertaken by the board to check pollution, however, appear to be inadequate or half-hearted, as air quality has not improved over the years. The board has set up three air monitoring stations under the National Ambient Air Quality Programme, which measures the ambient air quality of the area — the annual average values of RSPM (PM 10) at all three stations were observed above the permissible limit in the last five years.

He says that air pollution in the industrial area aggravates due to the burning of wood, rubber tubes and tyres and various types of plastic material. Proper technologies to mitigate pollution are available and these should be used so that people are not exposed to disease-causing pollutants, adds Dr Bal.

Aggravated cardiovascular and respiratory ailments and damaged cells in the respiratory system, which can cause diseases such as asthma, bronchitis and cancer, are also caused by air pollution, say health experts. However, an exhaustive action plan to mitigate air and water pollution in the area has not been implemented in totality.

The BBN area faces maximum traffic influx — its passenger car volume is about 25,000. The exhaust from a large number of vehicles, including about 10,000 diesel-run trucks transporting industrial goods, contributes significantly to air pollution.

“In a crackdown on the erring industries, the State Pollution Control Board officials recovered Rs 38.57 lakh from 24 units in the last two years. A total Rs 49.38 lakh of fine was imposed on 35 units,” says Aditya Negi.

The Baddi Barotiwala Nalagarh Industries Association has demanded setting up of a super specialty hospital in the area that lacks adequate healthcare facilities. Association president Sanjay Khurana says that the state government has been requested for a super specialty hospital having all modern facilities, as the area witnesses various diseases and frequent accidents.

Khurana says that the association has requested all units to ensure compliance of all pollution norms; the area has drawn the attention of the NGT for air and water pollution. He adds that the latest incident of Helios Pharma dumping effluents in the Malpur nullah was appalling and condemnable.

Sewage is also a key factor in the pollution of the Sarsa river. There are 3,230 jhuggis located in 40 revenue circles. As many as 16,897 persons, including 37 per cent children up to 14 years of age, reside in these shanties. They lack proper toilets and relieve themselves in the open.

The lack of commitment among local residents to check pollution is evident from the fact that only 24 people have been allotted sewer connections of the newly set up sewage treatment plant at Baddi. Despite spending about Rs 35 crore on the plant, it has been lying defunct.