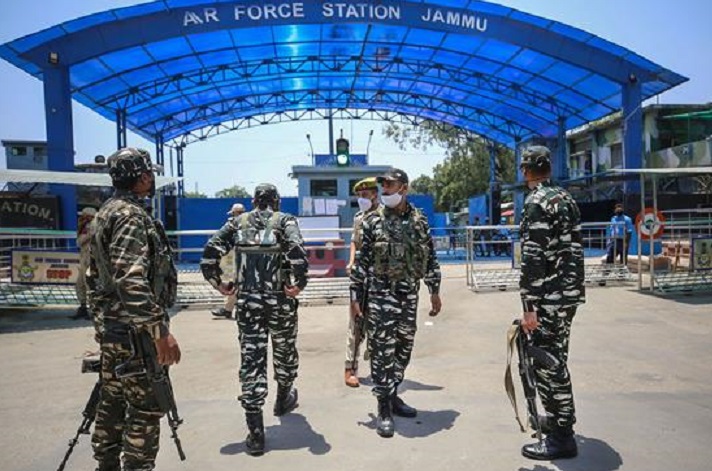 Security personnel stand guard outside the Air Force Station after two explosions reported in the technical area in the early hours of Sunday. PTI

It is perhaps the first time that suspected Pakistan-based terrorists have used unmanned aerial vehicles in an attack, officials said.

Two IAF personnel were injured in the explosions that took place around 1.40 am within six minutes of each other.

The area was sealed by security forces within minutes.

Two low intensity explosions were reported early Sunday morning in the technical area of Jammu Air Force Station. One caused minor damage to the roof of a building while the other exploded in an open area.

“Two low-intensity explosions were reported early Sunday morning in the technical area of Jammu Air Force Station. One caused minor damage to the roof of a building while the other exploded in an open area,” the IAF tweeted this morning.

There was no damage to any equipment, and an investigation is in progress along with civil agencies, the Indian Air Force said.

“The attack at the IAF station in Jammu is a terror attack,” Jammu and Kashmir police chief Dilbag Singh said.

He said the police and other agencies were working together with IAF officials to unravel the plan behind the attack. A team from anti-terror probe agency National Investigation Agency (NIA) was also at the spot.

Investigators are trying to ascertain the flight path of the two drones. They did not rule out the possibility of a terror attack.

A grenade attack has been ruled out for now as the blasts occurred close to the helicopter hangar, which is far from the perimeter fence.

The aerial distance between Jammu airport and the international border is 14 km.

The Indian Air Force station at Jammu is an important base for helicopters operating along the Western Front and in the Himalayas.

The Jammu airport is a civil airport with the runway and the ATC is under the IAF.

While officials were investigating the drone attack, another major strike was averted when a person, probably owing allegiance to the banned Lashker-e-Toiba, was arrested along with an improvised explosive device weighing around six kg, DGP Dilbag Singh said.

The person was tasked with triggering the IED in a crowded place.

“The suspect has been detained and is being interrogated. More suspects are likely to be picked up in this foiled IED blast attempt,” Singh said.

The Indian Air Force is probing whether the two low-intensity explosions were part of a terror attack, people familiar with the defence and security establishment said.

Investigators are also examining the possible use of drones to drop the explosives at the airport that has various assets of the IAF, they said.

The people cited above said all angles, including the possible involvement of terror networks in the explosions, are being probed.

The people cited above said the Chief of Air Staff, Air Chief Marshal RKS Bhadauria, has been apprised of the explosions.

The IAF Chief is on a three-day visit to Bangladesh from Saturday.

Meanwhile, Pathankot was put on alert, with police setting up 14 security checkposts in the area.