The area where the operation is currently going on falls under XVI Corps of the Army, also known as ‘White Knight’ 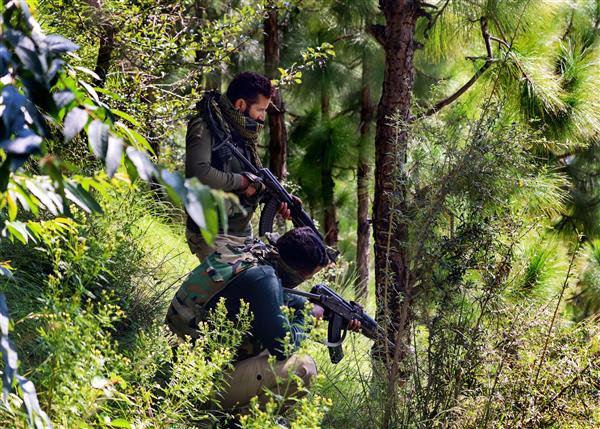 Security personnel near the site of an encounter with militants at Nar Khas area of Mendhar, in Poonch. PTI

After suffering nine casualties in as many days, the Army has upped the ante against the terrorists holed up in the jungles of Poonch in the Jammu region, asking locals not to venture out of their homes and blocking main roads for a full-scale operation, officials said.

As loud explosions and staccato of gunfire pierced the air in the border district of Poonch with the troops advancing into the dense forests, Army Chief General MM Naravane on Tuesday visited forward areas along the LoC to review the ground situation and ongoing counter-infiltration operations.

“General MM Naravane #COAS (Chief of Army Staff) visited forward areas of #WhiteKnight Corps & undertook a first-hand assessment of the situation along the Line of Control.

“COAS was briefed by commanders on the ground about the present situation & ongoing counter-infiltration operations,” the Additional Directorate General of Public Information (ADGPI) of the Indian Army tweeted.

The area where the operation is currently going on falls under XVI Corps of the Army, also known as ‘White Knight’.

Before concluding his two-day tour, the officials said the Army chief visited the border districts of Rajouri and Poonch, where the massive operation to track down terrorists hiding in the forest areas of Mendhar, Surankote and Thanamandi has been going on since October 11.

The operation to neutralise the holed-up terrorists intensified on Tuesday with authorities asking people in Mendhar in Poonch to stay indoors for their safety.

The people were alerted through the public address system in local mosques in Bhatta Durrian and adjoining areas as the security forces were preparing a final assault against the terrorists believed to be hiding in the forest area, the officials said.

The residents were asked not to venture into the forest area and also keep their livestock at their homes in view of the ongoing operation. Those who have gone outside were asked to suspend their activities and return to their homes along with their animals, the officials said.

The deafening sounds of explosions and gunfire shook the forest area shortly after the announcements with security forces launching assaults on suspected locations, mostly natural caves. However, there was no immediate report of any casualty.

A Junior Commissioned Officer (JCO) and four other security personnel laid down their lives in a fierce gunfight during the start of the counter-insurgency operation in Surankote forest of Poonch on October 11 and four other soldiers including another JCO lost their lives in another encounter in Nar Khas forest in Mendhar on Thursday evening after the security forces extended the cordon and search operation.

Drones and helicopters were pressed into service to assist the marching troops, which included para-commandos, in the jungle spread over nearly 8 km X 2 km area at a distance of four km from the Line of Control, the officials said.

The entire forest belt is still under tight security cordon to neutralise the terrorists, the officials said, adding the area is mountainous and the forest is dense, making the operation difficult and dangerous.

Eight suspected persons, including a mother-son duo, were detained for questioning from Bhatta Durrian in connection with providing logistic support to the terrorists. However, it is to be seen whether the support was given voluntarily or under duress, the officials said.

Earlier on Saturday, Deputy Inspector General of Police, Rajouri-Poonch range, Vivek Gupta said the presence of terrorists in the forest area connecting Poonch and Rajouri was observed two and a half months ago and accordingly tactical operations were launched to track them down.

“The joint security grid was tracking different groups of terrorists but sometimes operations take time, depending on the topography of the area.

“’The contact with the terrorists was established on three occasions during the start of the operation, based on the intelligence inputs,” the officer had said, adding the terrorists are holed up and the joint forces are on the job to take the operation to the logical conclusion.

The traffic between Mendhar and Thanamandi along the Jammu-Rajouri highway remained suspended as a precautionary measure for the fifth day on Tuesday in the wake of the ongoing operation.

Rajouri and Poonch in Jammu region have witnessed a rise in infiltration attempts since June this year, resulting in the killing of nine terrorists in separate encounters. —PTI