10 PDP leaders to be booked for 'violation' of Covid norms

Are guidelines not applicable to BJP workers, asks Mehbooba Mufti 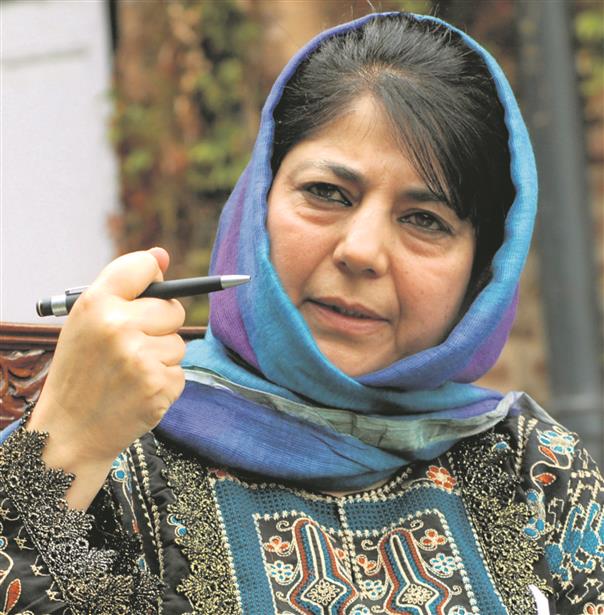 An executive magistrate in J&K’s Anantnag district has directed the police to register an FIR against 10 PDP leaders for allegedly violating Covid protocols at an event to mark party founder Mufti Mohammad Sayeed’s death anniversary, officials said on Saturday.

Reacting to the development, Peoples Democratic Party (PDP) president Mehbooba Mufti said it appeared that Covid norms applied only to her party and not to the BJP, which held a protest in Kashmir on Friday.

The executive magistrate of Bijbehara tehsil issued directions to the station house officer to lodge a case against 10 PDP leaders for violating Covid-appropriate behaviour during a rally at Sayeed’s graveyard on Friday, officials said. These leaders include Sartaj Madni, Sayeed’s brother-in-law who is a former deputy speaker of the Assembly, and former minister Abdul Rehman Veeri.

Hitting out at the administration over the order, Mehbooba tweeted, “Covid 19 restrictions apply only to the PDP, not to BJP’s protest in Kashmir yesterday, PM’s rally in Punjab or the mass poojas attended by hundreds of people to pray for his safety. Talks volumes about J&K administration’s brazen bias against my party.”

Mehbooba was also a part of Friday’s gathering but was not named in the order of the executive magistrate.

Meanwhile, J&K recorded 655 fresh Covid cases on Saturday, taking the virus tally to 3,43,965, while three fatalities due to the disease were reported from the Union Territory in the past 24 hours, officials said. Of the fresh cases, 392 were from the Jammu division and 263 from the Kashmir division. There are 2,982 active cases in the UT while the count of recoveries now stands at 3,36,446. The new fatalities pushed the death toll from the pandemic to 4,537 in J&K.

Ladakh's caseload increased to 22,413 as 43 more people tested positive. As many as 71 patients recovered from the disease bringing down the active cases to 241. Of the fresh cases, 36 were reported in Leh and seven in Kargil district. No fresh death was reported in the UT. According to officials, the death toll stands at 221, including 163 in Leh and 58 in Kargil. The active cases in Ladakh have come down to 241. Sixty-four patients were discharged from hospitals in Leh and seven in Kargil, taking the total number of recoveries to 21,951, they said. — PTI