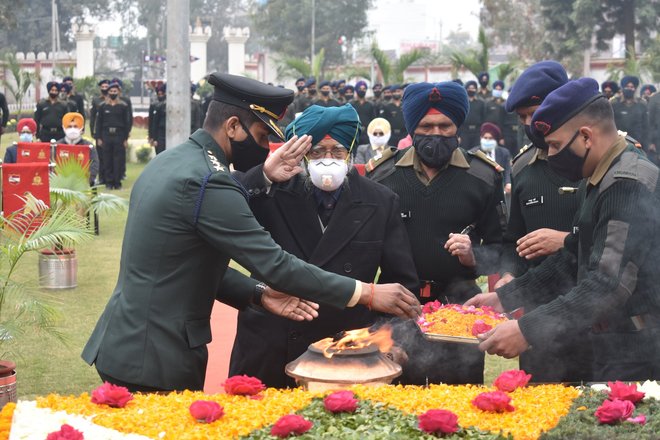 The ‘Swarnim Vijay Varsh’ ‘mashaal’, as part of the 50th anniversary celebrations of India's victory over Pakistan in the 1971 war, reached Basoli military station near Lakhanpur — the gateway to Jammu and Kashmir — on Saturday, a defence spokesman said.

The ‘mashaal’ was received by Brigadier Manoj Kharkwal in the presence of other dignitaries at Basoli, where major decisive battles were fought and won by India during the 1971 operations, the spokesman said.

Last year, PM Narendra Modi lit the ‘Swarnim Vijay Varsh Mashaal’ (golden victory year torch) from the eternal flame of the national war memorial in Delhi on December 16 — the day India celebrates as Vijay Diwas to commemorate its victory over Pakistan during the 1971 war that led to the creation of Bangladesh.

The spokesman said the ‘mashaal’ would remain in the folds of the Arsenals Brigade till Apr 7 during which a number of events would be held at various venues to mark the occasion.

He said some of these include felicitation of war heroes and ‘veer naries’, cultural programmes by students of KV Lakhanpur and APS Janglot, various school- level competitions and participation by NCC cadets. — PTI