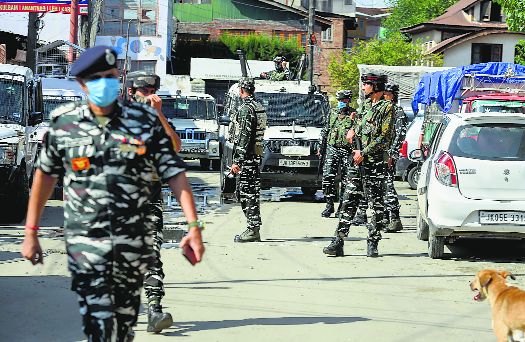 An encounter broke out between security forces and terrorists at Tulran Imamsahab area of Shopian district after a team of the police and the Army cordoned off the area and launched a search operation. Further details are awaited, officials said.

Security forces had launched a cordon-and-search operation at Khagund in Anantnag district’s Verinag area following information about the presence of militants. The search operation turned into an encounter after militants opened fire on the security personnel, who retaliated. According to police officials, a militant had been killed and a policeman suffered injuries during the gunfight.

In another encounter which broke out at Gundjahangir in Bandipora district’s Hajin area, a Lashkar-e-Taiba militant was killed.

Inspector General of Police, Kashmir, Vijay Kumar tweeted that the slain terrorist had been identified as Imtiyaz Ahmad Dar affiliated with proscribed terror outfit LeT (TRF). He was involved in recent civilian killing at Shahgund Bandipora.

As the security forces zeroed in on the spot where terrorists were hiding, they came under a heavy volume of fire that triggered the encounter.

Earlier on Monday, five soldiers, including a junior commissioned officer (JCO) were killed in a gunfight with the terrorists in Poonch district. (With IANS inputs)