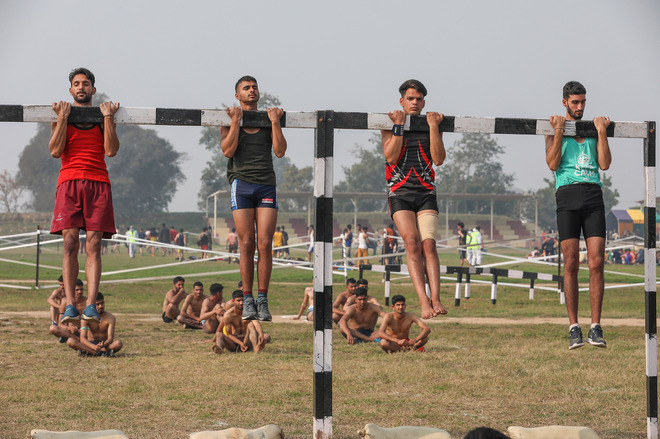 Candidates undergo a fitness test at an Army recruitment camp in Jammu on Saturday. PTI

Around 40,000 youths have registered online for the ongoing Army recruitment rally, the first in the Jammu division after the outbreak of the Covid pandemic last year, a Defence spokesman said on Saturday.

The February 15-March 6 rally for recruiting various categories of soldiers is being conducted under the aegis of Tiger Division at the Sunjuwan Military Station here.

“The rally is being organised for the youths of all the 10 districts of the Jammu division. The Army Recruiting Office (ARO), Jammu, in close coordination with Shivalik Brigade, civil administration of the Jammu division and the J&K Police is conducting the ongoing rally in a smooth and transparent manner,” the spokesman said.

He said the General Officer Commanding, Tiger Division, Maj Gen Vijay B Nair, reviewed the conduct of the recruitment rally on Saturday.

This is the first Army recruitment rally in the Jammu division after the Covid-19 restrictions.

“An overwhelming response from the exuberant youths has been recorded and approximately 40,000 candidates have registered online. Covid-19 protocol is being followed during the rally by all participants and staff,” the spokesman said. — PTI