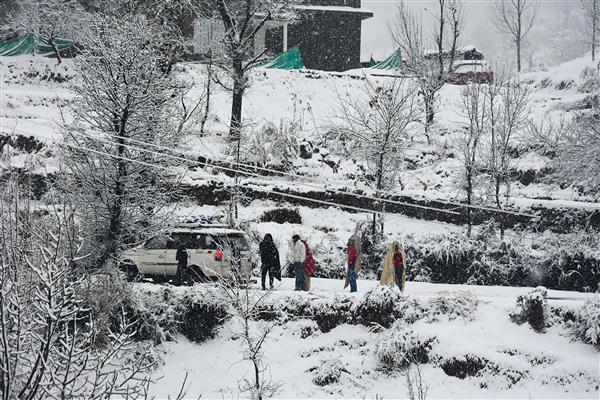 Tourists in a snow-covered area on the outskirts of Mendhar in Poonch district on Saturday. PTI

All scheduled flights were cancelled on Saturday due to heavy snowfall that reduced visibility at the airport here, snapping air link between Kashmir and rest of the country, officials said. The snowfall started on Friday afternoon and continued through the day at most places.

“All the 40 flights scheduled to operate at the Srinagar airport had to be cancelled due to snowfall,” an official of the Airport Authority of India (AAI) said. He said that snowfall had reduced visibility to less than 600 metres at the airport. Problems related to low visibility will be addressed soon as an upgraded instrument landing system (ILS) will be installed at the airport by November this year.

The official advised passengers to reschedule their flights, which, he said, would be done by airlines free of cost. “The passengers are entitled to full refund if they decide to cancel their journey,” he said.

The air traffic to and from Kashmir has been badly affected over the past few days with a large number of flights getting cancelled due to poor visibility. Srinagar recorded the minimum temperature of 0.2° Celsius last night. Gulmarg recorded -4.6° Celsius, while Pahalgam, which serves as the base camp for Amarnath yatra, recorded -0.2° Celsius. — PTI