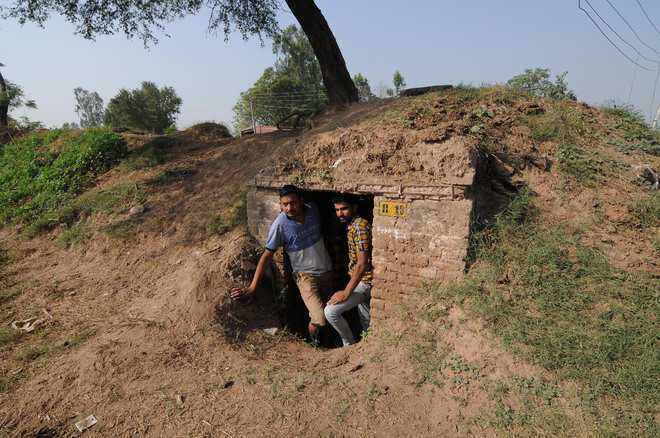 The work on about 8,000 bunkers have been completed for the safety of the people living along the Line of Control (LoC) in Jammu province, officials said on Sunday. File photo

The work on about 8,000 bunkers have been completed for the safety of the people living along the Line of Control (LoC) in Jammu province, officials said on Sunday.

The Centre had sanctioned the construction of 14,460 individual and community bunkers for the border residents in the five districts of Jammu, Kathua and Samba, covering the villages located along the international border, and Poonch and Rajouri villages.

Work in progress on 9,905 structures

The work is in progress on 9,905 bunkers which are under different stages of construction

The Centre had initially sanctioned 14,460 bunkers. Later, over 4,000 additional structures were approved

Later, the government sanctioned over 4,000 additional bunkers to cover the more vulnerable population. “A total of 7,923 bunkers, including 6,964 individual and 959 community structures, have been completed so far in (Jammu) division,” an official spokesman said, as Divisional Commissioner, Jammu, Raghav Langer reviewed the progress on the construction of the safety structures at a meeting here.

There has been no major ceasefire violation over the past three months in J&K after India and Pakistan signed a fresh agreement to maintain calm along the border on February 25 this year.

The spokesman said the work was in progress on 9,905 bunkers. Langer took a strong note of delay in tendering of pending bunkers and directed the executive engineers concerned to float the tenders afresh for the constructions, which have not been taken up as yet, for their early completion, the spokesman said. The DCs have been directed to personally monitor the already executed work, while the executing agencies have been asked to expedite the work pace and adhere to the set timelines. — PTI