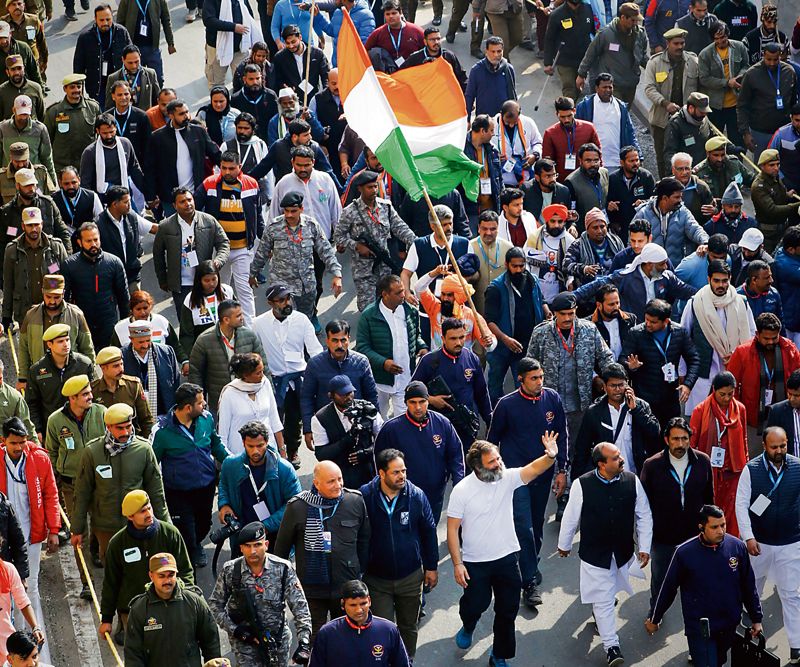 Amid high alert after twin bomb blasts in Jammu city on Saturday, security arrangements were tightened for the Bharat Jodo Yatra which resumed from Hiranagar in Kathua on Sunday morning and reached Samba later in the day.

Congress leader Rahul Gandhi was surrounded by CRPF and police personnel. Participants were allowed close to the leader only after verification. Security personnel used ropes to encircle Gandhi and the group of participants so that no anti-social element breaks the cordon.

There will be no compromise on Rahul Gandhi’s security. We will adhere to security guidelines. —Jairam Ramesh, Cong leader

Divisive politics is good neither for Muslims nor Hindus. We need to work together for the country. Digvijaya Singh, Congress

The rallyists, who had taken a day’s rest on January 21, are expected to reach Jammu Monday afternoon. The traffic on the Pathankot-Jammu highway has already been diverted through other areas.

During a press briefing, senior Congress leader and MP Jairam Ramesh said a large number of people wanted to join the yatra but the police did not allow them. “Due to security concerns, the march is covering 22 km each day and protocols are being followed. There will be no compromise on the security of Rahul Gandhi. For us, his security is the top priority. We will adhere to all the guidelines by the security forces,” he said. Rahul is expected to meet a group of Kashmiri Pandits tomorrow and listen to their grievances.

“The way media is being handled, there is an undeclared emergency. It seems there is a dictatorship of a single man in the country,” he said. He also alleged that AAP, Democratic Azad Party and AIMIM were “B-teams” of the BJP. “These parties have been formed with the sole aim to cut the Congress votes across the country,” he said.

Meanwhile, Congress leader Digvijaya Singh said terrorism is alive in Jammu and Kashmir despite the abrogation of Article 370. Singh said the recent terror attacks were worrisome.

Officials said adequate security arrangements have been put in place to ensure a peaceful march.