Amid tight vigil, Tiranga rally flagged off from Srinagar : The Tribune India

Amid tight vigil, Tiranga rally flagged off from Srinagar 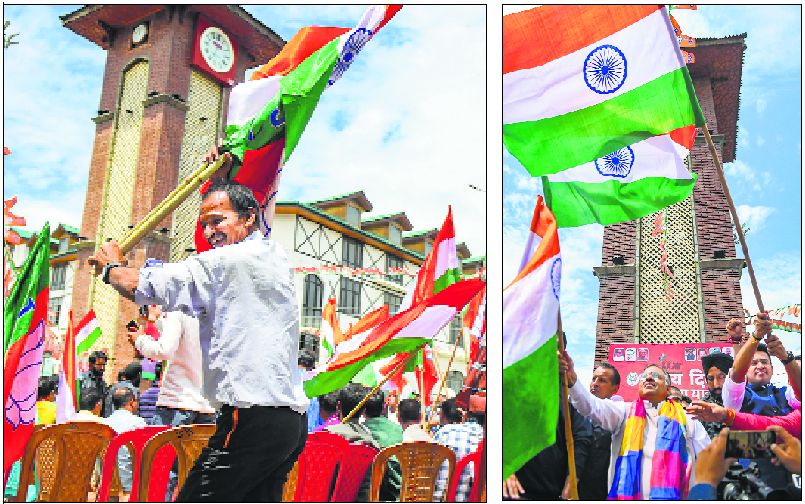 A BJP worker dances; and (right) party's general secretary Tarun Chug, along with BJYM president Tejasvi Surya, flags off a Tiranga rally at Lal Chowk in Srinagar on Monday. PTI

Srinagar’s historic Lal Chowk was out of bounds for locals on Monday as a rally of bike-borne BJP workers entered the city centre to hoist the national flag and pay tributes to the martyrs of Kargil War. Nearly 300 bikers from across the country, mostly of the Bharatiya Janata Yuva Morcha (BJYM), participated in the rally that was flagged off by BJP general secretary Tarun Chug. The rally will reach Kargil War Memorial in Drass on July 26 on the occasion of Vijay Diwas. BJYM president Tejaswi Surya was also present.

Article 370 was not only a barrier for J&K’s full integration with India, but also a cultural hurdle. Tejasvi Surya, BJYM President

The Lal Chowk event saw unprecedented security arrangements as the whole area was sealed amid a heavy deployment of security personnel. Drones too were used to keep vigil. Authorities shut shops and schools as roads leading to the Ghanta Ghar were barricaded.

Tarun Chug said, “The Mufti and Abdullah families had made J&K a terrorism capital while PM Narendra Modi made it a tourism capital.”

He said Mehbooba Mufti had claimed that after the abrogation of Article 370, no one would raise the Tricolour in J&K. “Let her see how everyone has been carrying the Tricolour,” he said.

PDP leader Ghulam Nabi Lone Hanjura said, “Roads leading to Ghanta Ghar and Lal Chowk were blocked. Shops and a school in the vicinity were shut so that a political party can showcase its nationalism.”

Rajnath, chiefs of Tri-Services to pay homage in Delhi