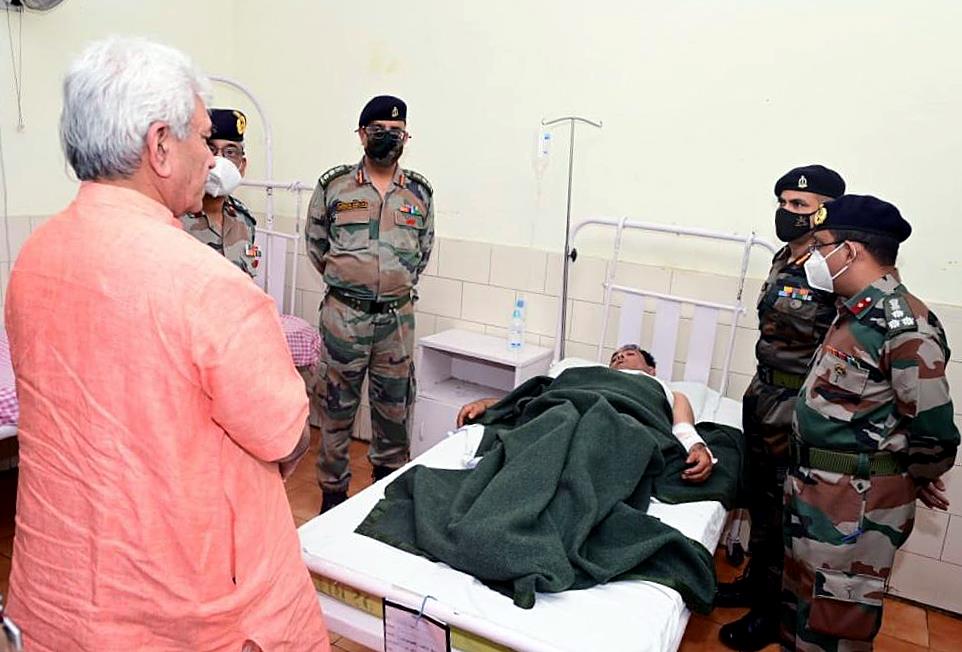 Lieutenant Governor Manoj Sinha visits the injured at the Army hospital in Srinagar on Tuesday. ANI

Terrorists shot dead a Kashmiri Pandit and injured his brother at an apple orchard in Jammu and Kashmir’s Shopian district on Tuesday, forcing community leaders to call for mass migration from the Valley.

Sunil Kumar, 52, and his brother Pinto Kumar, 45, were working in their orchard at Chotigam village along with three Muslim neighbours when two armed terrorists attacked them.

“They asked us about Sunil and separated the two brothers. As we started running away, we heard the sound of multiple gunshots. We ran towards the market and informed locals about the incident,” said an eyewitness. Sunil was fatally wounded and died on the spot, while Pinto sustained two bullet injuries and was undergoing treatment at a hospital in Srinagar.

Sunil is survived by his widow, three children and parents.

The incident shook the minority community, which has already been reeling under fear following the killing of an employee, Rahul Bhat, in May. Members of the Muslim community joined the family in mourning at their two-storey house, located barely about 500 metres from the orchard.

Terrorists had struck in the same village in April when they opened fire on Kashmiri Pandit chemist Balkrishen Bhat, alias Sonu Kumar, who miraculously escaped death. He was injured and remained in hospital for a long period.

Only two Kashmiri Pandit families now live at Chotigam village. The other family has decided to leave the Valley. “I had requested the government to provide us security, but they have left us to die here,” said Chintoo Kumar, a neighbour of the victims.

Condemning the attack, Lieutenant Governor Manoj Sinha tweeted, “Pained beyond words. My thoughts are with the family of Sunil Kumar. Praying for the speedy recovery of the injured. Terrorists responsible for the barbaric act will not be spared.”

National Conference leader Omar Abdullah said, “An accident and a militant attack have left a trail of death and suffering. I condemn the attack in Shopian unequivocally. My condolences to the family.”

Srinagar: The Kashmiri Pandit Sangharsh Samiti has asked community members to leave the Valley in the wake of attacks by militants. “With another attack in Shopian, terrorists have made it clear that they are going to kill all Pandits,” KPSS chief Sanjay Tickoo said.