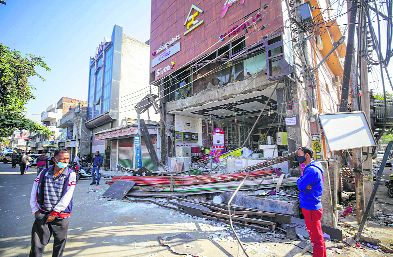 Debris lies on the ground after an anti-encroachment drive by the MC at Shivaji Chowk in Jammu on Saturday. PTI

An anti-encroachment drive by the Jammu Municipal Corporation (JMC) on Saturday sparked protests by the businessmen community at different markets here, officials said.

An anti-encroachment team of the JMC removed a shutter of a hardware showroom at Shivaji chowk and also pasted a notice informing its owners that the building had been sealed. The officials said the action triggered protests by businessmen of the area who observed a shutdown, accusing the JMC of highhandedness.

Arun Gupta, president of Jammu Chamber of Commerce and Industry (JCCI), joined the protesters and said the business community was already suffering due to Covid-19 over the past two years and such actions have a crippling impact on a number of families.

A senior civil officer visited the agitated businessmen and assured them that he would look into the matter.

Shopkeepers in Shastri Nagar, Gandhi Nagar and Moti Bazar in the city also staged protests against the JMC for its anti-encroachment drive, the officials said. — PTI