The envoys were also briefed about the role of the Pakistani army in helping terrorist infiltrate into India, infiltration patterns and use of drones by Pakistan to airdrop weapons meant for terrorists 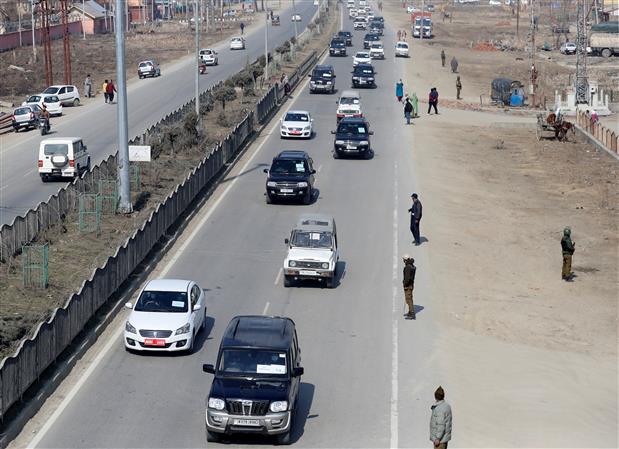 Senior army officials on Thursday briefed envoys from 24 countries visiting Jammu and Kashmir about the role of the Pakistani army in running terror factories across the Line of Control by organising training camps, officials said.

The envoys, including from member states of the European Union (EU), Brazil and Malaysia, were also briefed about the role of the Pakistani army in helping terrorist infiltrate into India, infiltration patterns and use of drones by Pakistan to airdrop weapons meant for terrorists, they said.

Use of tunnels for pushing terrorists into India, especially in the Samba sector of Jammu and Kashmir, was highlighted by the army, which also gave a detailed presentation about the weapons, bearing markings of the Pakistani army, seized from various militants.

Tunnels were being used following a drop in the number of terrorists sneaking into India from across the Line of Control (LoC) due to heightened vigil and changed tactics in the army's counter-infiltration grid, the officials said.

On the situation in the Kashmir Valley, the army officials highlighted Wednesday evening's incident when the son of a prominent eatery owner was shot and critically wounded by terrorists at his shop in a high-security area of the city.

This was part of the terrorists' game plan to silence either moderate voices in Kashmir or those who refused to follow their diktat, they said.

The army also gave a detailed briefing on how internet-warfare was used by Pakistani establishments to brainwash youngsters through social media platforms.

Coming to the situation post the abrogation of the special status of the erstwhile state of Jammu and Kashmir and its bifurcation into union territories of Ladakh and Jammu and Kashmir in 2019, the army officials said there had been no loss of life due to the action of security forces.

There had been a marked decrease in law and order problems and incidents of stone-pelting had seen a sharp decline, the army officials told the visiting envoys, and also shared their experience during the recent District Development Council elections, which were conducted successfully.

Besides terrorism and the situation along the LoC, the officials informed the envoys about the assistance being provided to people living in far-flung areas. They were also informed about the tourism sector in the Kashmir Valley and achievements of the Kashmiri people in various fields.