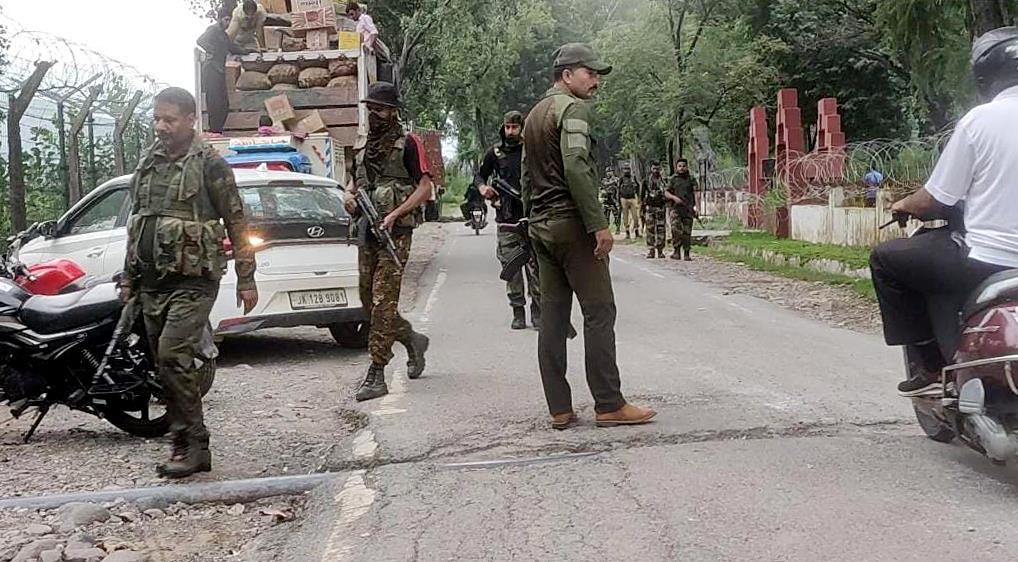 Jawans carry out a search operation after the attack on the Army camp in the Darhal area of Rajouri. ANI

Four soldiers, including a Junior Commissioned Officer (JCO), were killed and two others were injured in a ‘fidayeen’ (suicide) attack as two militants tried to enter the Army camp in Parghal area of Darhal in Jammu and Kashmir’s Rajouri district in the wee hours today. Both the militants were gunned down in the encounter that followed.

Army spokesman Lt Col Devender Anand said sentries detected suspicious persons approaching their post while taking advantage of the inclement weather and dense foliage. Due to the thick vegetation near the post, the movement of the suspected Jaish-e-Mohammad (JeM) terrorists, wearing police uniform, could not be detected till both of them reached close to the fence, he said.

“The sentries challenged the terrorists, who lobbed a grenade while attempting to enter the camp. However, the troops cordoned off the area and engaged the duo in a firefight. Both terrorists were neutralised in the ensuing encounter. Six Army soldiers were injured in the operation, four of whom succumbed at an Army hospital,” said Lt Col Anand. Those martyred are Subedar Rajendra Prasad of Maligoven village of Kashim Pura in Jhunjhunu (Rajasthan) and riflemen Manoj Kumar of Shahjahanpur village in Faridabad (Haryana), Nishant Malik of Hansi in Hisar (Haryana) and Lakshmanan D of T Pudupatti village in Madurai (Tamil Nadu).

Coming four days ahead of Independence Day, the ‘fidayeen’ attack has set alarm bells ringing for the security establishment. Security forces and the police had been put on alert following intelligence inputs on suspected movement of terrorists in the Rajouri belt, prompting them to launch a combing operation in Darhal and Nowshera on Tuesday and Wednesday.

ADGP (Jammu) Mukesh Singh said, “As reported by 11 Rajputana Rifles, someone (terrorists) tried to cross the Army camp’s fence at Parghal. Additional forces were rushed to the spot, which is about 6 km from Darhal police station.”

Sources said the terrorists were armed with AK series rifles, grenades and other arms and ammunition. They were wearing vests to carry grenades and magazines. Nine magazines, grenades and two rifles have been recovered. J&K LG Manoj Sinha condemned the attack and vowed to deal with terrorists and their supporters in a befitting manner.