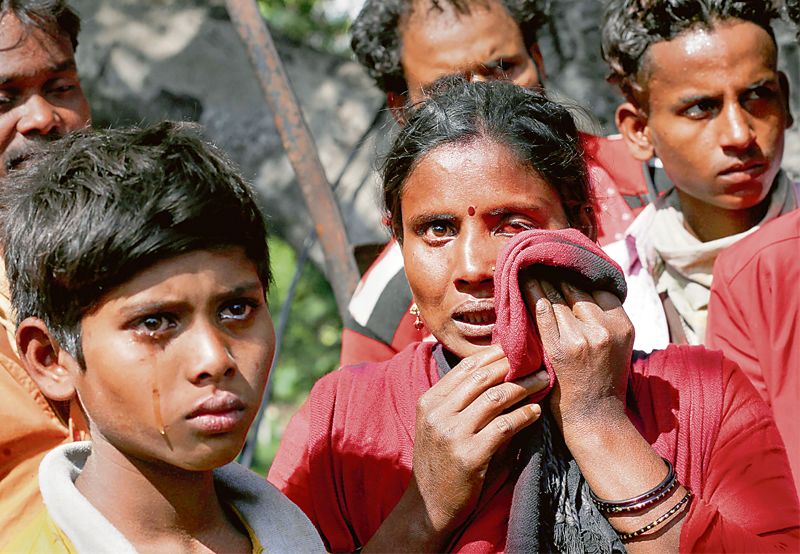 Terrified migrant labourers in tears as they arrive in Jammu. PTI

Army Chief General MM Naravane is on a two-day visit to Jammu where the General Officer Commanding (GOC) of White Knight Corps will give him an update on the security situation and operational preparedness, the Indian Army said on Monday.

Terrorists shot dead two non-local labourers and injured another in Kulgam district of Jammu and Kashmir on Sunday, the latest in a series of attacks on civilians. “General Naravane, COAS (Chief of Army Staff), is on a two-day visit to Jammu region wherein GOC White Knight Corps will give an update on security situation and operational preparedness. The COAS will visit forward areas and interact with troops and commanders on ground,” the Army said.

In Srinagar’s Lal Chowk, women were frisked by women CRPF constables — a first-of-its-kind exercise in the last 30 years — in the wake of civilian killings. Some women expressed resentment. “They should have erected a makeshift cubicle so that privacy was maintained,” Fareeda said. She said she had no issues with the frisking but the manner in which it was done.

The authorities have moved thousands of migrant workers in Kashmir to safer locations while hundreds have fled the Valley in the wake of a wave of targeted killings since early October, despite a widespread security crackdown. “We moved thousands of workers to secure places and are facilitating their return home,” a senior police official said, declining to be named.

The hundreds of thousands of migrant workers in Kashmir form the backbone of the region’s workforce in agriculture and construction. Some of them said they now feared for their lives. “We have seen worse times, but were never targeted,” said 32-year old Mohammed Salam from Bihar. Salam was picked up, along with others, from their rented accommodation on Sunday night and moved to a protected area. “We can’t sit idle here. We will go back,” he said. — PTI/Reuters