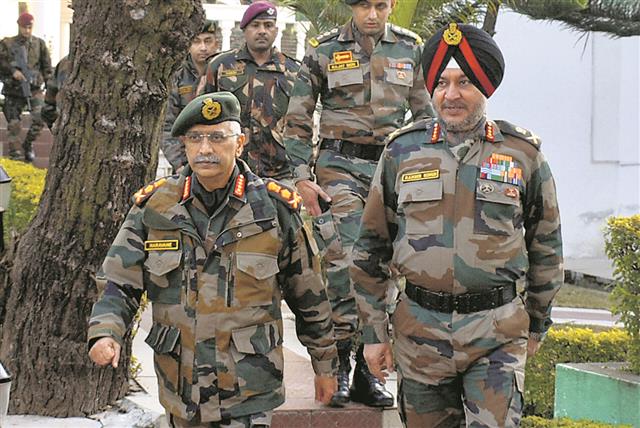 On his maiden visit to Jammu and Kashmir Union Territory, Army Chief General Manoj Mukund Naravane on Thursday reviewed security and operational readiness along the Line of Control (LoC) in the Jammu region.

The Army Chief, along with Lt Gen Ranbir Singh, General Officer Commanding, Northern Command, also called on Lieutenant Governor Girish Chandra Murmu and discussed the prevailing security situation. Murmu was appreciative of the synergy between the Army, other security forces and the civil administration in maintaining law and order.

At the Northern Command Headquarters in Udhampur, the General was briefed by Lt Gen Ranbir Singh on the LoC situation and also in the hinterland. The Army Chief was appreciative of the efforts put in by the Northern Command to meet the challenges posed by inimical elements.

Gen Naravane also visited troopers on the LoC to review operational readiness of the units of White Knight Corps. He was briefed and updated by Lt General Harsha Gupta, General Officer Commanding, White Knight Corps, and commanders on ground. He interacted with soldiers and lauded them for their unwavering dedication to duty, selfless devotion and high standard of professionalism.

The need to remain prepared for all contingencies was also reinforced by Chief of Army Staff during his interaction with the troopers. “General Manoj Mukund Naravane commended the standard operating procedures institutionalised to ensure safe and secure environment and mission readiness of the troops. He conveyed his satisfaction on the people-friendly measures undertaken in quick timeframe,” an Army spokesperson said.