At minus 7.8 degrees Celsius, Srinagar records lowest temperature in 8 years

The rest of the valley was also reeling under intense cold. 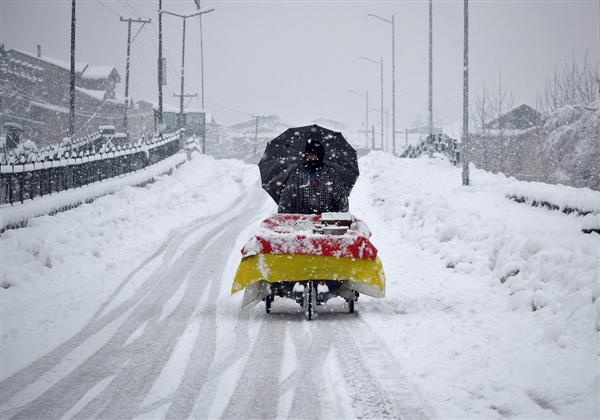 The rest of the valley was also reeling under intense cold. PTI photo.

The Kashmir Valley reeled under severe cold, with Srinagar city—the summer capital of Jammu and Kashmir—recording its lowest minimum temperature in eight years, the Meteorological Department said here on Wednesday.

Srinagar recorded a low of minus 7.8 degrees Celsius, which was the lowest temperature recorded in the city in eight years, an official of the MET department said.

He said the exact same minimum temperature was recorded in the city in 2012 on January 14.

The rest of the valley was also reeling under intense cold.

Pahalgam tourist destination, which also serves as a base camp for the annual Amarnath yatra in south Kashmir, recorded a low of minus 11.7 degrees Celsius – down from the previous night’s minus 5.6 degrees Celsius.

The resort was the coldest recorded place in Jammu and Kashmir.

The sudden plunge in the minimum temperature resulted in the freezing of water supply pipes. A thick layer of ice had frozen over many stagnant water bodies including the Dal Lake.

Kashmir is currently under the grip of ‘Chillai-Kalan’—the 40-day harshest winter period when a cold wave grips the region and the temperature drops considerably.

The chances of snowfall are the most frequent and maximum during this period and most areas, especially in the higher reaches, receive heavy snowfall.

While ‘Chillai-Kalan’, which began on December 21, will end on January 31, the cold wave continues even after that in Kashmir with a 20-day ‘Chillai-Khurd’ (small cold) and a 10-day ‘Chillai-Bachha’ (baby cold).—PTI