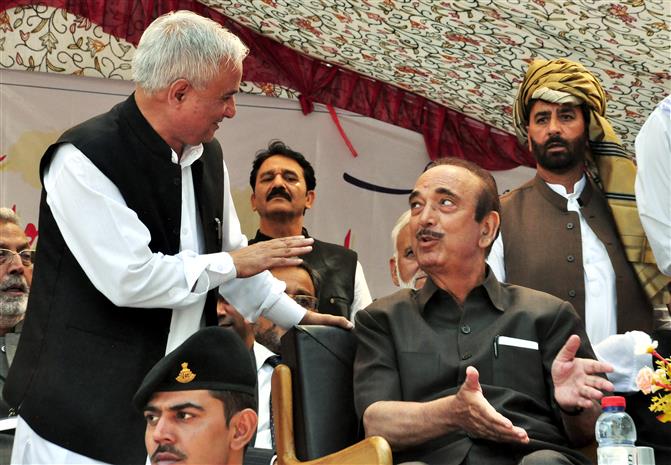 Ghulam Nabi Azad interacts with a leader during a public rally in Anantnag on Thursday. ANI

Hours after former Congress leader Ghulam Nabi Azad received a militant threat, he attacked Pakistan for “being the reason behind all the suffering and destruction” in J&K. Azad appealed to the youth to shun gun culture and don’t look towards Pakistan, terming it a failed state relentlessly trying to trigger disharmony in J&K.

A threat letter, said to be issued by a propaganda arm of the Lashkar-e-Toiba, appeared on social media, calling Azad a traitor and accusing him of having planned to float a new political party at the behest of the BJP.

During a rally in Anantnag, Azad said, “Countries which walked on the path of militancy have become its victims and lost whole generations of people to the vicious cycle of death and bloodshed. Those who have picked up guns, I appeal to them that gun is not a solution. India is the biggest democracy. We are the nation of Gandhi. Those who bang their heads against mountains, will get their heads crushed. Nothing will happen to the mountains.”

Responding to the threat letter, Azad said, “I just heard that there is a threat letter against me from militants. They said that before coming to Kashmir, I met Amit Shah and Ajit Doval. By Allah, I have never met Doval. When I was in Parliament, I met all the political leaders.”

They (militants) say I met Amit Shah and Doval before coming to Kashmir. I never met Doval. — Ghulam Nabi Azad