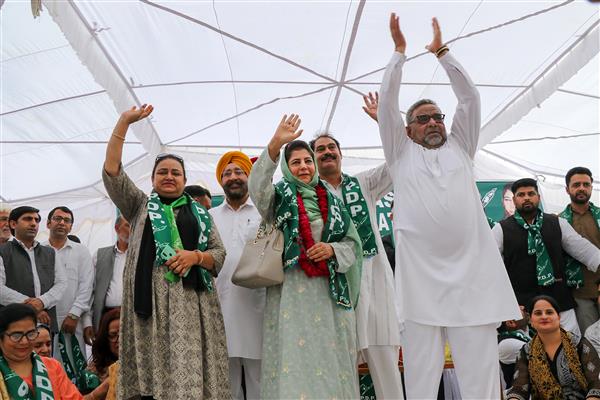 Mehbooba Mufti, president of the Peoples Democratic Party, during a one-day workers’ convention in Jammu on Sunday. PTI

PDP president Mehbooba Mufti on Sunday lauded Congress leader Rahul Gandhi for his ‘Bharat Jodo Yatra’ and said the people should support him. “He is fighting to safeguard the country and its democratic institutions from the onslaught of the BJP,” she said.

The former J&K CM also questioned the criteria for the selection of BJP leaders’ kins to head various sports streams and asked “does (Home Minister Amit Shah’s son) Jay Shah know how to hold a bat?” Addressing a party convention here, she said Rahul Gandhi was being targeted by the BJP because he was from the Gandhi family which had a “history of sacrifice” for the country.

Accusing the BJP of being afraid of secularism and democracy, she alleged that it had divided the country in the name of religion and regions for its vested political interests.

Listing people from political families who are members of the BJP, she said the difference between Gandhi and the BJP dynasts was that his family had a long contribution for the nation as Nehru was jailed for over a decade during the freedom struggle, while his grandmother Indira Gandhi and father Rajiv Gandhi sacrificed their lives for the country.