Bodies of two civilians killed in Hyderpora encounter exhumed; to be handed over to families

The bodies, accompanied by a police team, are being moved to Srinagar from Handwara where they were initially buried, the officials said 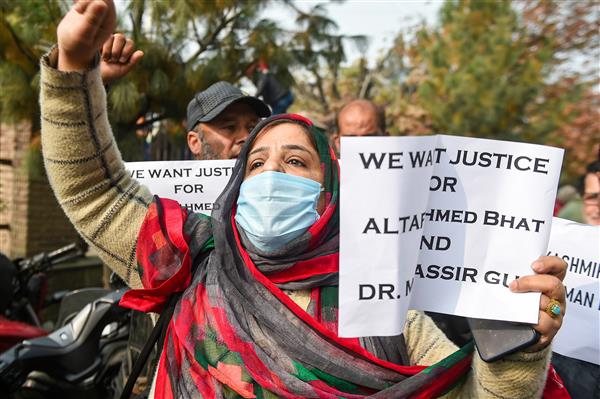 Leaders and workers of J&K Peoples Conference hold placards and shout slogans during a protest demanding a probe into the killings of civilians Altaf Ahmad Bhat & Mudasir Gul and the return of their bodies, in Srinagar, Thursday, Nov. 18, 2021. PTI

Authorities on Thursday exhumed bodies of Mohammad Altaf Bhat and Mudasir Gul, two civilians killed in the Hyderpora encounter, for handing them over to their families, officials said.

The bodies were exhumed after sundown and are likely to be handed over to their families later in the night, they said.

This will be for the first time that the body of a person buried under police watch is returned to his kin since the outbreak of the COVID-19 pandemic in March last year.

The bodies, accompanied by a police team, are being moved to Srinagar from Handwara where they were initially buried, the officials said. PTI