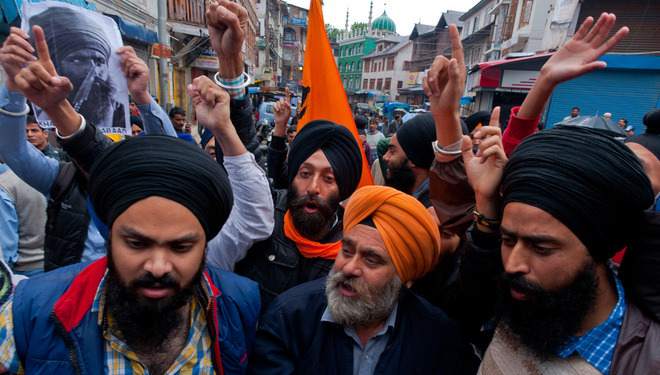 On the 21st anniversary of the Chattisinghpura massacre, Sikhs in Jammu and Kashmir today renewed the call for a fresh probe into the horrific incident with the All Parties Sikh Coordination Committee, Kashmir, issuing a formal statement in this regard.

Deep wound on the soul of community

It was a horrific crime committed to send a message to the US and defame India. It is a deep wound on the soul of the Sikhs who were punished for standing by the country. If our brothers want a fresh probe, we are with them.

“After 21 years, the people of J&K especially the Sikhs of the Valley, are waiting for justice and urge the state and the Centre to nab the culprits of the Chattisinghpura massacre,” president of the committee Jagmohan Singh Raina said today.

The committee said in 2000, unidentified gunmen had entered a quiet south Kashmiri village and massacred 36 men. “The murders shocked the entire region. Questions about who perpetrated the horrific killings still look and await answers. The police said nearly 20 militants carried out the massacre but out of them only five were caught and later killed. Those killed were residents of Brackpura and a judicial enquiry by the Justice Pandan Commission had looked into the matter, but answers still evade us,” Raina said urging for closure to the families of slain Sikhs.Raina appealed to LG Manoj Sinha and the Centre to order a fresh probe into the killings of Sikhs in Chattisinghpura.

“If this is not done, we will consider it as a grave injustice to the Sikhs of Kashmir,” he said. The massacre took place hours before the arrival of then US President Bill Clinton to India, the first visit by a US President to India in 22 years. Raina recalled how after the killings, then CMof the state Farooq Abdullah publicly assured that the culprits would be arrested. “So far the promises made by the former CM have not been fulfilled,” said Raina.