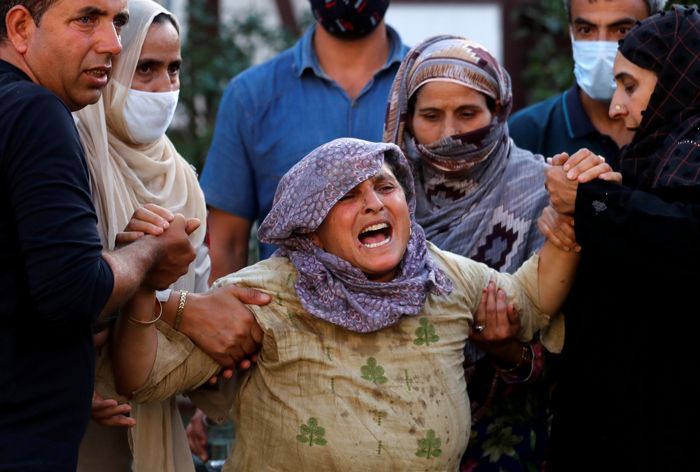 A probationary Sub-Inspector, Arshid Ahmad, was shot dead by a militant from point-blank range this afternoon at a marketplace in the Khanyar area.

The cop was shot at a police checkpoint near Khanyar police station in the old Srinagar city. Arshid was taken to the SMHS hospital in the city. Finding him critical, doctors referred him to the SKIMS, Soura, where he succumbed.

A CCTV footage shows a militant shooting the officer at least twice from behind from point-blank range. Officials said the area has been cordoned off and a hunt launched to nab the attacker.

Those behind killing have been identified and will be brought to justice soon, DGP Dilbag Singh has said

“We have lost a brave young officer who was just at the threshold of service. He was learning the nuances of policing,” he said

Dozens of terror modules have been neutralised, but new modules try to take their place, say police

The people behind the killing have been identified and will be brought to justice soon, DGP Dilbag Singh said.

“We have lost a brave young officer who was just at the threshold of service. He was learning the nuances of policing. He was deputed to a hospital for a check-up of the accused person and while coming back from the hospital, he was shot. It is a very tragic loss for us and the family and we express our condolences,” the DGP said.

Asked about the attacks in the city, he said dozens of such modules who attack civilians or security forces had been neutralised, but new modules try to take their place.

Meanwhile, political parties condemned the killing. The National Conference tweeted, “Strongly condemn the killing of SI Arshid Ahmad in a dastardly act of senseless violence. We express condolences to the family members of the fearless policeman killed in the line of duty.”

NC vice president Omar Abdullah tweeted, “Sorry to hear about the death... A young life with so much promise, another grieving family.”

PDP president Mehbooba Mufti offered condolences to the family. “Saddened to hear about the death of J&K Police Sub-Inspector Arshid Ahmed killed by militants at Khanyar.”

The People’s Conference (PC) stated, “We unreservedly condemn the dastardly and cowardly militant attack. Our thoughts and prayers are with them (cop’s family).” PC chairman Sajad Lone said the killing has made an addition to the “army of orphans” in the Valley.