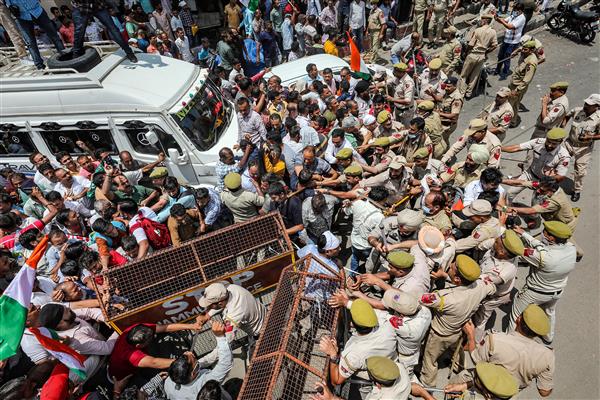 PHE daily wage employees scuffle with the police as they protest demanding regularisation of services in Jammu on Monday. PTI

Hundreds of daily wagers of the Jal Shakti Department staged a protest and blocked a highway in Jammu on Monday seeking regularisation of services.

The Jal Shakti (PHE) Employees and Workers Association, which organised the protest, said the daily wagers have been struggling for over two decades for regularisation.

Waving national flags, the workers assembled outside the office of the Jal Shakti Department and raised slogans against the Jammu and Kashmir administration and in support of their demand. They also blocked a highway.

The protesting workers, who ensure drinking water supply across Jammu, threatened to intensify their protest if their demand was not met.