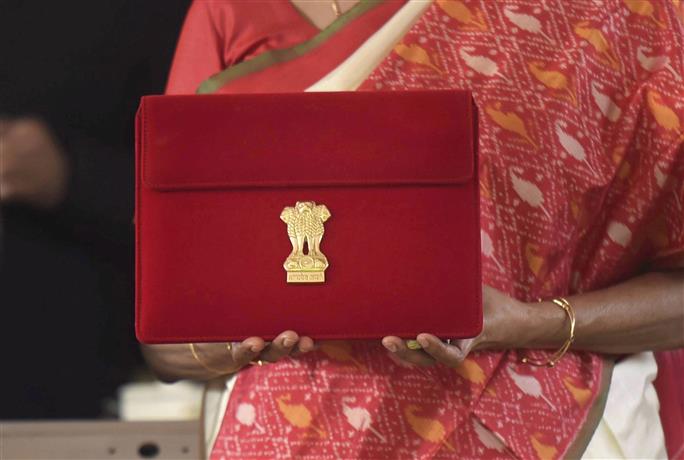 Finance Minister Nirmala Sitharaman holds a case containing a tablet device, during the Budget Session of the Parliament, at Parliament House in New Delhi. PTI

Newly carved out Union Territories of Jammu & Kashmir (J&K) and Ladakh got a special package in the Union Budget for 2021-22 presented by Finance Minister Nirmala Sitharaman in Parliament on Monday in which she announced laying of new gas pipeline and setting up of a central university.

In her budget speech, the finance minister said, “Our government has kept fuel supplies running across the country without interruption during the COVID-19 lockdown period. Talking not of the crucial nature of this sector in people’s lives key initiatives are being announced. These include a gas pipeline project in the UT of J&K, which will be taken up this year.”

She went on to add that 100 more cities will be added in the next three years to the gas distribution network.

In a bid to make sure accessibility of higher education in Ladakh, having difficult terrain with borders with China, Sitharaman has proposed that the UT will have a central university in Leh.

“For accessible higher education in Ladakh, I propose to set up a central university in Leh,” said Sitharaman while presenting the Budget in the Parliament.

More to it she also proposed: “100 new Sainik schools will be set up in partnership with NGOs, private schools, and states.”

She went on to add: “We would be introducing the legislation this year to implement the setting-up of the Higher Education Commission of India.”

There are other “umbrella” structures to be created for higher education, the finance minister announced, adding that more than 15,000 schools will be strengthened under NEP 2020.