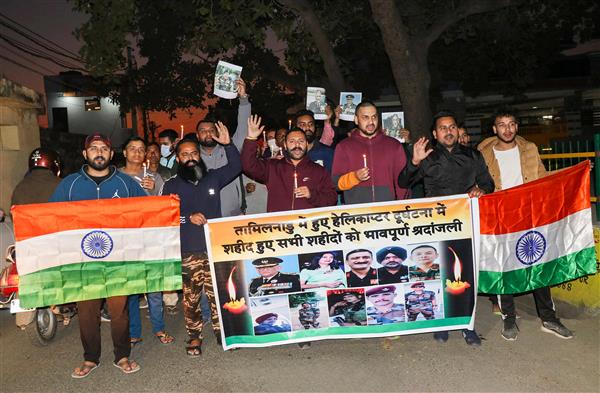 People pay homage to General Bipin Rawat and others killed in the helicopter crash, in Jammu on Thursday. PTI

People of Baramulla in north Kashmir have lost more than anyone else in the death of Chief of Defence Staff General Bipin Rawat as he had close connection with them and loved them, General Officer Commanding (GOC) of the Army’s Chinar Corps, Lt Gen DP Pandey, said on Thursday.

Speaking to reporters at Baramulla after paying tributes to Gen Rawat, who had been the GoC, Dagger Division, in Baramulla, the GoC said it would take a lot of time for us to come out of this grief. He said Gen Rawat used to attend phone calls from everyone from Baramulla. “He (Rawat) would listen to their requirements and then he would call me and ask me to listen to their demands and help them. I am sure the people of Baramulla have lost more than anyone else,” he said.

Describing the death of the Chief of Defence Staff and others in the helicopter crash as a huge tragedy, the General Officer Commanding said it would take a lot of time to come out of the grief. “I really wanted to come here to Baramulla where he was a GoC. Though he was also the Commander of 5 Sector (RR), the two tenures were close to his heart especially because of the people. I am sure you all must be feeling this loss like the Army, armed forces and the whole country is feeling. His wife and others were also killed and this is a huge tragedy and it will take a lot of time for us to come out of this grief,” he added. — PTI

Police suspect involvement of someone close to the family