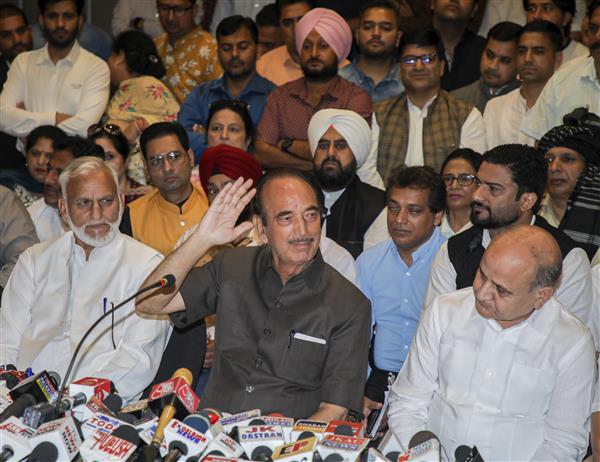 Former Jammu and Kashmir Chief Minister Ghulam Nabi Azad, who had ended his more than five-decade-long association with the Congress on August 26, here today launched his own political outfit, Democratic Azad Party.

“Democratic is for democracy and ‘Azad’ for independence.... The party will be democratic and not autocratic. The power will not remain in one hand,” he said.

Terming other parties in J&K as competitors, and not “enemies”, the former Union minister also unveiled his party’s striped three-coloured flag. He said mustard signified creativity, blue depth of ideas and independence, and white peace. He claimed the “divide” that had been created among various communities in J&K needed to be bridged.

As stated earlier, he said he would not make the restoration of Article 370 an election issue. Addressing the media, he said he wanted to announce his party’s name on the first Navratri. Flanked by several senior J&K leaders who too had resigned from the Congress along with him, Azad said he had received over 1,500 suggestions from across the country, but he chose a name that could be understood by the people of all cultures and religions.

“Some names were in Urdu and others in Sanskrit. But I wanted a ‘Hindustani’ name that could be understood by all, and signified democracy, peace and independence,” he said.

Azad said there were allegations that he was working in collusion with a political party. “I didn’t consult any party for the name or the flag of my outfit. I only had discussions with my own people,” he said. Opposition parties have accused Azad of hobnobbing with the BJP. He said 50 per cent of the posts in his party would be reserved for women and youth. “There will be no discrimination and influence of religion or caste,” he said.