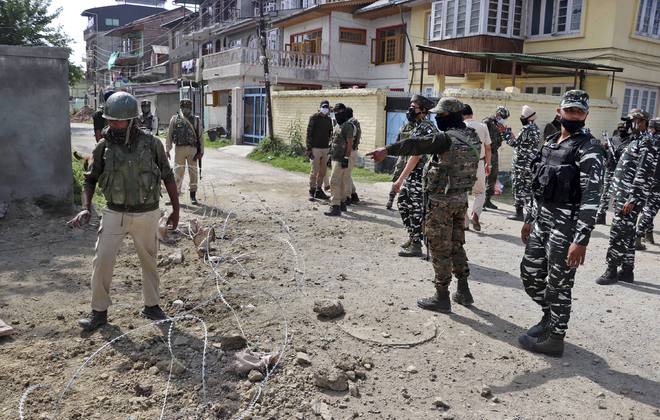 Security personnel inspect an IED at Chanpora in Srinagar. PTI

Seven people were injured in an explosion in Tral town of Pulwama district on Sunday.

Apparently a grenade blast, it took place in the bus stand of Tral. “Seven persons were injured. They have been shifted to sub-district hospital in Tral where doctors referred one of the injured to Srinagar,” the sources said, adding that the injured had splinter injuries according to doctors. A search operation was launched at the site.

A day before, security forces had detected and defused a suspected improvised explosive device (IED) in Srinagar. Planted in a steel container, the substance weighed approximately 10 kg and it was found near the government quarters in Chanpora, an official said, adding that a bomb disposal squad later defused the explosive device. — PTI/IANS

Occurred at around 1 am, the blast damaged two bikes besides triggering panic among residents