J-K parties get into huddle after being invited to PM’s meet; Congress raises pitch for statehood restoration 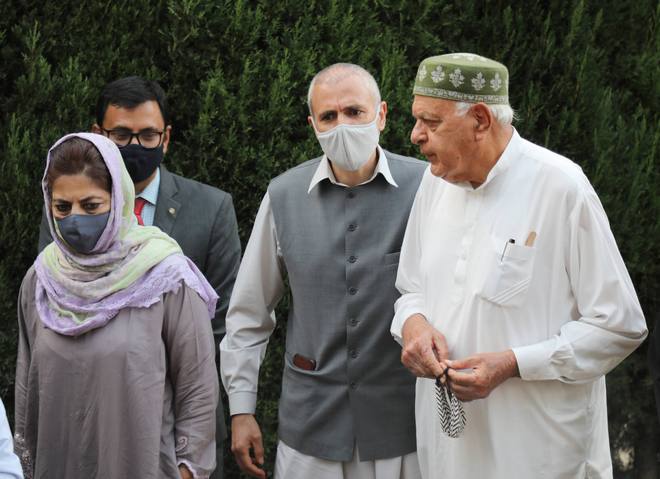 The People's Alliance for Gupkar Declaration (PAGD) will meet here Tuesday to discuss the Centre's invitation to mainstream political parties of Jammu and Kashmir for an all-party meeting to be chaired by Prime Minister Narendra Modi on June 24, a leader of the grouping said.

The PAGD is an alliance of six parties in Jammu and Kashmir, including the NC and the PDP, formed in the aftermath of the Centre's August 2019 decision to nullify Article 370 and split J&K into two union territories.

"The alliance meeting is scheduled to take place on Tuesday at 11 am," a PAGD leader told PTI.

He said the meeting would take place at the Gupkar residence of National Conference (NC) president Farooq Abdullah, who is also the chairman of the alliance.

The leader said the alliance members would discuss the Centre's invitation to mainstream political parties of Jammu and Kashmir for the talks.

PAGD spokesman and senior CPI(M) leader M Y Tarigami confirmed the meeting of the alliance is scheduled to take place on Tuesday to discuss the invitation.

"The process of discussions is on and we are meeting on Tuesday to finalise (the decision on the invitation). We will let our decision known afterwards," he said.

Invitations have been sent out to 14 political leaders from Jammu and Kashmir including four former CMs for a high-level meeting to be chaired by Prime Minister Narendra Modi in New Delhi on June 24 which is expected to set the roadmap for holding assembly elections in the UT.

The PM's meeting with the political parties from Jammu and Kashmir is part of the Centre's initiatives to bolster political processes, including holding assembly elections, in the union territory.

Asked if the member parties of the PAGD have left the decision on whether to participate in the PM's meeting to the alliance, the PAGD leader quoted above said the constituents were part of the “larger alliance” and will discuss the issue together.

“See, the invitations have been sent to individual leaders and not to the alliance and not even to parties to send their representatives... But, as we happen to be together as the constituents of the larger alliance, so, we will discuss the issue together as well,” he said.

He added that a united approach will be "good for the health of our society and our politics".

"There would be a commonality in our approach this way. That is what is required," he said.

A leader from the NC said the parties have left the decision on the participation in the PM's meet to the alliance.

"See, it is not only about a meeting with the PM. There has to be a discussion on the stand to be taken, the way forward and other such things. While the intra-party consultative process will continue, the PAGD will meet and discuss the issue collectively," he said.

This comes after hectic political consultations within mainstream regional parties including the National Conference (NC) and the PDP over an all-party meeting to be chaired by Prime Minister Narendra Modi on June 24.

The release of Mehbooba’s uncle Sartaj Madani from preventive detention after nearly six months and her party’s jailed youth president Waheed-ur-Rehman Parra, charge-sheeted by the National Investigation Agency and the Jammu and Kashmir police, being brought back to Jammu from Kashmir is seen as a move to ensure that Mehbooba participates in the meeting.

The PM’s meeting with all political parties from Jammu and Kashmir is part of the Centre’s initiatives to bolster political processes, including holding assembly elections, in the union territory.

Invitations were sent out to 14 political leaders from Jammu and Kashmir, including four former chief ministers, for participation in the high-level meeting to be chaired by the PM, which is expected to set the road map for holding assembly elections in the UT.

The leaders of eight political parties—the NC, PDP, BJP, Congress, Jammu and Kashmir Apni Party, CPI(M), People’s Conference, and the Panthers Party—were telephonically invited by Union Home Secretary Ajay Bhalla for participation in the meeting to be held at the prime minister’s residence in the national capital at 3 PM on Thursday.

This will be the prime minister’s first interaction with all the political parties of Jammu and Kashmir since August 5, 2019, when the central government abrogated the state’s special status and bifurcated it into UTs. The erstwhile state has been under the Centre’s rule since June 2018.

In Delhi, the Congress said the Centre should accept the demand for restoration of statehood to J-K in the interest of the Constitution and democracy.

Congress chief spokesperson Randeep Surjewala, however, did not say whether the party will participate in the June 24 meeting or not.

Surjewala drew attention to the August 6, 2019, resolution of the Congress Working Committee (CWC) where the party clearly demanded the restoration of full statehood for the state of Jammu and Kashmir.

“We believe that undoing it is a direct attack on democracy and the constitutional principles,” he told reporters when asked about the issue.

Surjewala said the Congress believes that grant of full statehood to Jammu and Kashmir as also holding elections, so that people can elect their representatives and have an assembly of their own to carry on the affairs of the state instead of a rule by Delhi, is the only way forward to guarantee full restoration of democratic rights in Jammu and Kashmir.

“It is now for the prime minister and the BJP to decide whether to hold a meeting or to accept the demand of the Indian National Congress in the interest of constitution, democracy and the people to restore full statehood to the state of Jammu and Kashmir,” Surjewala said.

In a related development, Panthers Party, whose chief Bhim Singh has been invited for talks, staged a protest in Jammu against the alleged “Kashmir appeasement policy” of the central government.

The party was unhappy that a majority of the leaders invited to the all-party meeting were from the Valley.

Singh said he is meeting the party leaders on Monday to discuss the invitation and take a decision about his participation.

“I have received an invitation for the meeting and will discuss it with party leaders tomorrow (Monday) to make a decision,” the JKNPP president told PTI.

“The government invited all Kashmir-based parties for the meeting but ignored the leadership of Jammu.

“Altaf Bukhari’s recently launched Apni Party and Sajjad Lone’s People’s Conference, which are yet to be recognised by the Election Commission of India, have got the invitation while only Bhim Singh was invited from Jammu,” Harsh Dev Singh told reporters. — PTI