Jammu and Kashmir issue can only be settled through talks between India-Pak: Mehbooba

She said if India can talk to China, talks should be held with Pakistan as well 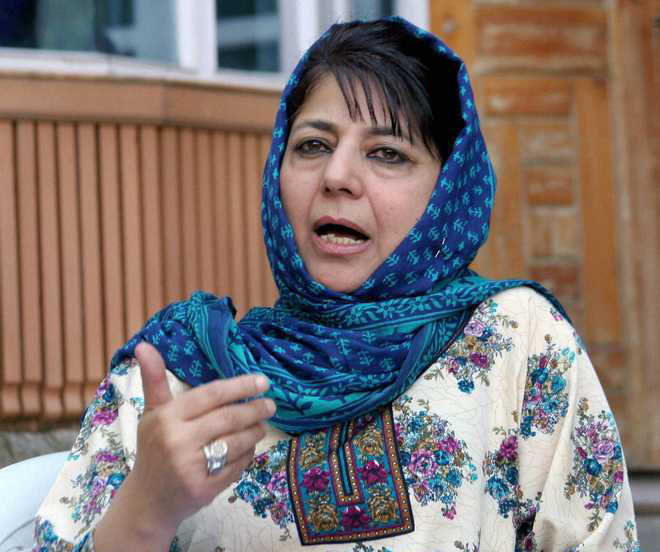 PDP president Mehbooba Mufti on Sunday said that neither war nor the gun are solutions, and the issue of Jammu and Kashmir can be only settled through talks between India and Pakistan.

The Centre should also engage the people of the Union Territory in the dialogue process, she said after visiting Kupwara district’s Zirhama area to express her solidarity with the family of a policeman, who was killed in a terrorist attack here on Friday.

Talking to reporters there, Mehbooba regretted the loss of lives over the years in Jammu and Kashmir, and said it was “very unfortunate that the Central government is not bothered about it”.

She said if India can talk to China, talks should be held with Pakistan as well.

“China entered into our territory and killed over 20 of our jawans (army personnel). But, despite that talks are being held with them which is a good thing. The talks have been held about a dozen times and some resolution can be seen,” she said.

The PDP chief said Jammu and Kashmir has become a “battleground” between India and Pakistan, and people—policemen, common people and security personnel – were getting killed on both the sides.

“War is not a solution to any issue. No issue is settled through gun – be it of the militants or the security forces. So, we think that like any issue is settled across the world by way of dialogue, there is a need to hold talks with Pakistan, as well as in Jammu and Kashmir,” she said.

When asked about the Centre’s stand on talks with Pakistan, Mehbooba said it seems “they are not worried about the people of Jammu and Kashmir being killed”.

“They are not concerned then and would say let them die. Whenever talks have been held in J-K or with Pakistan like 2003-04 when (BJP leader) LK Advani was deputy prime minister, talks were held with (former Pakistan president Pervez) Musharraf, violence in J-K had decreased significantly, militancy had come down,” she said.

Now also, there is a need to have the same policy and without that, there is no other choice, the former Jammu and Kashmir chief minister said. —PTI