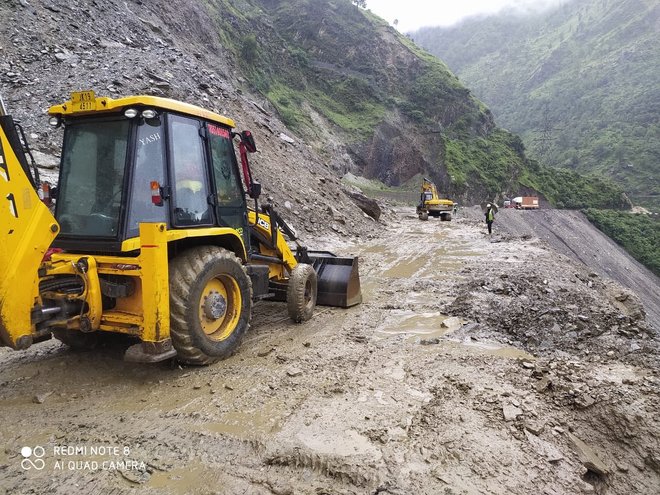 Around 200 passengers have been stranded at different places between the treacherous Ramban and Banihal stretch.

The continuous falling stones at many vulnerable spots on the Jammu-Srinagar national highway, the only road link connecting Kashmir with the rest of the country, have become a major challenge for the clearance of the road for traffic.

The traffic on the highway was suspended due to multiple landslides triggered by heavy rains at Panthyal, Battery Cashma, Marog, Monkey Morh and Trishul Morh in the Ramban sector on Thursday morning.

Ramban Deputy Commissioner Nazim Zai Khan said there were six to seven points where stones had been falling.

“We have launched clearance operation at the Mompassi point near Ramsoo, but continuous falling stones at Panthyal and other places have been hampering the clearance work. We are unable to carry out the task as it is raining heavily in the area,” Khan said, adding that “the traffic would remain suspended on the highway till the clearance operation was over”.

“Around 200 passengers have been stranded at different places between the treacherous Ramban and Banihal stretch. Refreshment for stranded is being organised at Seri and Ramban. Last evening, we cleared around 150-200 vehicles stranded in the area, but continuous rain and falling stones have turned out to be a major challenge for the road-clearing teams. The operation was stalled and we are awaiting favourable weather conditions to launch the operation again.”

According to the traffic police officials, over 1,000 vehicles have been stranded at different places along the highway, including Ramban, Banihal, the Udhampur-Jakheni bypass, Dhar Road and the Nagrota area of Jammu.

“No fresh movement of vehicles is being allowed from the TCP Jakheni (Udhampur) towards Kashmir and from Qazigund towards the Jammu side since Thursday morning,” the officials said.

Meanwhile, the National Highways Authority of India, which has been executing the four-laning project, has submitted a detailed project report, worth Rs 2,000 crore, to the Centre for the realignment of the 14-km four-laning road stretch on the Ramban-Banihal section to bypass six “killer spots” to make it an all-weather road.