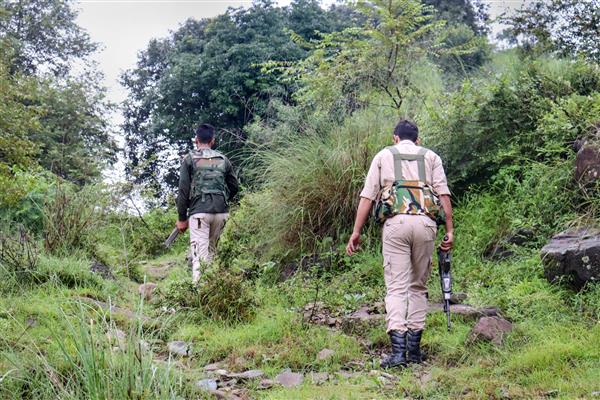 Security men search the area near the encounter site. PTI

The terror attack at an Army camp in Rajouri district of Jammu and Kashmir today is the first such attack in four and a half years, and raises several questions.

Earlier too, suicide bombers have attacked Army camps. On February 10, 2018, an Army camp at Sunjuwan in J&K was attacked. Two days later, terrorists had targeted a CRPF camp at Karan Nagar in Srinagar. Since then, military camps have not been targeted. One reason was that the Army and the CRPF changed their standard operating procedures after the terror attack on a military camp at Uri in September 2016. The Uri attack had led to surgical strikes at multiple locations across the LoC. The camp under attack today is a “company operating base”. A “company” comprises approximately 100 men. It is set up to dominate an area and cannot be termed a full-fledged base. The camp is some 25 km inside the LoC, indicating that the terrorists must have infiltrated earlier. Travelling 25 km, that too in such heavy rain, is almost impossible in one go in the mountainous terrain of Rajouri. The geographical location of the camp indicates that a local guide must have been available to the terrorists, who came wearing police uniform.

The officials said they were seeing this as a “message” as the attack came on Raksha Bandhan and just four days ahead of Independence Day.