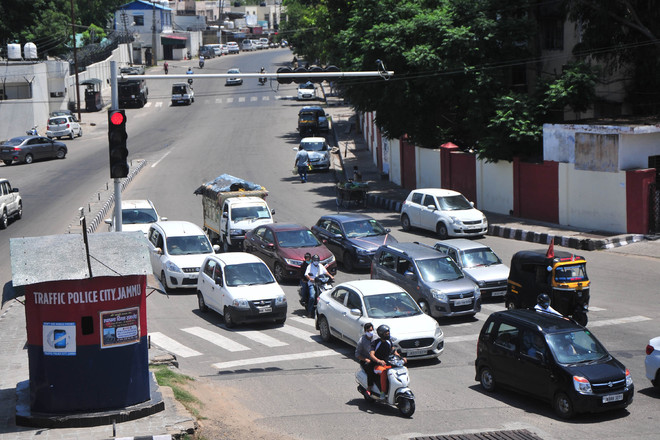 The J&K High Court says the life-time road tax paid at the time of purchase cannot be levied again.

The J&K High Court on Thursday quashed a government circular on re-registration of vehicles purchased outside the Union Territory and said the life-time road tax paid at the time of purchase cannot be levied again.

In its 28-page order, a Division Bench comprising Justices Vinod Chatterji Koul and Ali Mohammad Magrey asked the transport department to work out a mechanism for re-registering vehicles that have been in the jurisdiction of the Union Territory for more than 12 months.

The circular was issued by the department in the first week of this month.

The J&K High Court says the life-time road tax paid at the time of purchase cannot be levied again.

Transport officials have been asked to work out a mechanism for re-registering vehicles that have been in the UT jurisdiction for over 12 months.

The court, while quashing the circular issued, said it does not take away the powers of the Central or the Jammu and Kashmir governments to deal with the eventuality of screening, scrutinising and verifying validity of documents of a vehicle having an outside registration. The court was hearing petitions filed with regard to the circular by Zahoor Ahmad Bhat and Irshad Hussain Munshi through their counsels.

The court also said it was not interfering with the powers of the transport authority to deal with cases, which fall under Section 50 of the Motor Vehicles Act (transferring of ownership). This matter, which falls under the application of Section 50, is not the subject in these writ petitions, it said.

The court said it has already noticed “the scheme of law, which provides for assignment of new registration mark but deem it proper to reiterate that if the vehicle once registered in any state in India, it shall not be required to be registered elsewhere in India”.

“But when the motor vehicle registered in one state has been kept in another state for a period exceeding 12 months, the owner shall apply to the registering authority within whose jurisdiction the vehicle is for the assignment of new registration mark,” it said.

A lifetime tax that is levied at the point of registration of a vehicle in terms of Section 3 of the Motor Vehicles Act and it cannot be levied on a vehicle registered, merely on a presumption that a vehicle registered outside Jammu and Kashmir, has remained in the UT for a period exceeding 12 months, the court said. — PTI