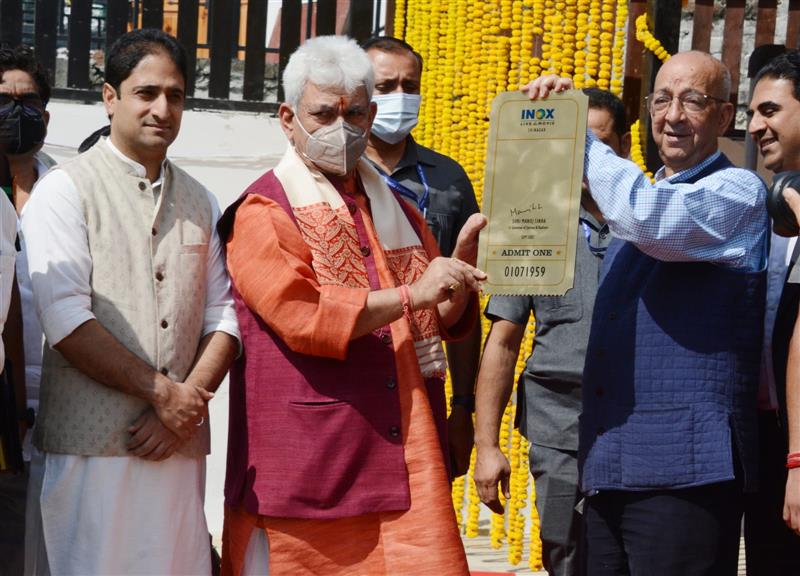 Kashmir on Tuesday got its first-ever multiplex after the cinemas remained closed for over three decades.

Jammu and Kashmir’s Lieutenant Governor Manoj Sinha inaugurated the multiplex here and said each district in the Union Territory will have 100-seater cinema halls soon.

“There used to be a time when people in large numbers would come to watch movies along with friends and families. Cinemas would provide them with opportunities to think big and dream big besides entertaining them,” Sinha said after inaugurating the multiplex at Shivpora locality here.

The Aamir Khan-starrer ‘Laal Singh Chaddha’ is the first movie to be screened in the 520-seated multiplex with three auditoriums.

Selected media and officials were invited to watch the movie.

The multiplex designers have given it a touch of Kashmiri architecture by using Khatamband and papier mache on the walls of its lobbies.

Designed by INOX, the multiplex has many food courts and recreation facilities for children. It has Dolby sound systems installed for a better experience.

Sinha said the Kashmiri people have remained entertainment starved for the past three decades and now, the first multiplex will provide the Valley people a chance to relax and entertain themselves.

Srinagar was once a hub of entertainment as the district had almost eight big cinemas— Palladium, Regal, Sheeraz, Neelam, Khayam, Broadway, Naaz and Firdous.

“We are trying to bring back the lost era again. The opening of the multiplex reflects the changing picture of Jammu and Kashmir,” he said.

People will soon be able to watch 3D movies as well on the screen, said Vikas Dhar, the owner of the multiplex.

The cinemas across Kashmir were shut after an armed insurgency erupted in the Valley in 1989.