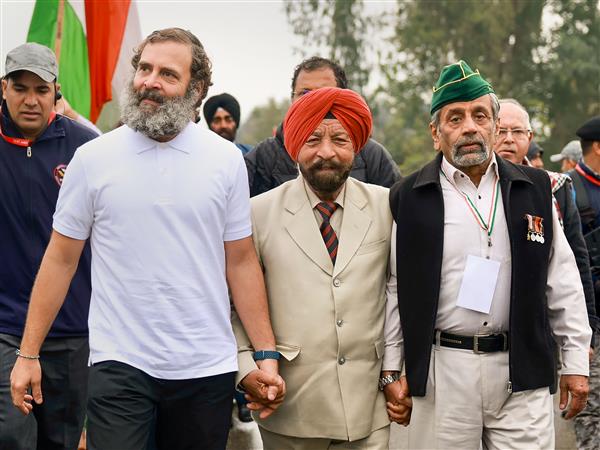 The Congress wants to take the Bharat Jodo Yatra, led by Rahul Gandhi, through the interiors of the Kashmir valley, but has left the decision on the route of the foot march to security agencies and the J&K administration, party leader Chetan Chauhan has said here. “We have carried out reconnaissance and submitted two routes — one through the national highway and another through the interiors of Kashmir. Now it is up to security officials and the administration to allow us or not,” Chauhan said. He said the Congress has not released the yatra’s route plan in Kashmir due to security reasons.

‘Chargesheet’ to be released today

Raut said he has come to join the yatra on behalf of his party. “The atmosphere in the country is changing fast and I am seeing Gandhi as a leader who is raising his voice on real issues,” he said.

A delegation of veterans, led by Capt Bana Singh (retd), who was awarded the Param Vir Chakra — the highest wartime gallantry medal for his bravery during Operation Rajiv in the highest battlefield of Siachen in Ladakh in 1988, also joined the foot march.

Congress general secretary and MP Jairam Ramesh said democratic procedure was not followed to abrogate Article 370 in August 2019. Addressing a press conference, the leader said Article 370 was abrogated without any examination and discussion.

Besides, the party will take up a two-month campaign from next week to take Rahul Gandhi’s message to every household in the country, he said. According to the Congress leader, the party has prepared a “chargesheet” against the Central Government that will be released in Delhi on Saturday. That “chargesheet” along with Rahul’s message will be taken to the masses so that the people may know about the “misrule of the government”, said Jairam Ramesh.

Rahul Gandhi's march was to begin at 7 am from Hatli Morch in Kathua but it was late by over half an hour due to rain.

Many Congress leaders, including party’s J&K chief Vikar Rasool Wani, senior leaders GA Mir, Ravinder Sharma among others were present during the march.

The march started from Kanyakumari on September 7 and will culminate with Rahul Gandhi hoisting the national flag at the party headquarters on January 30.