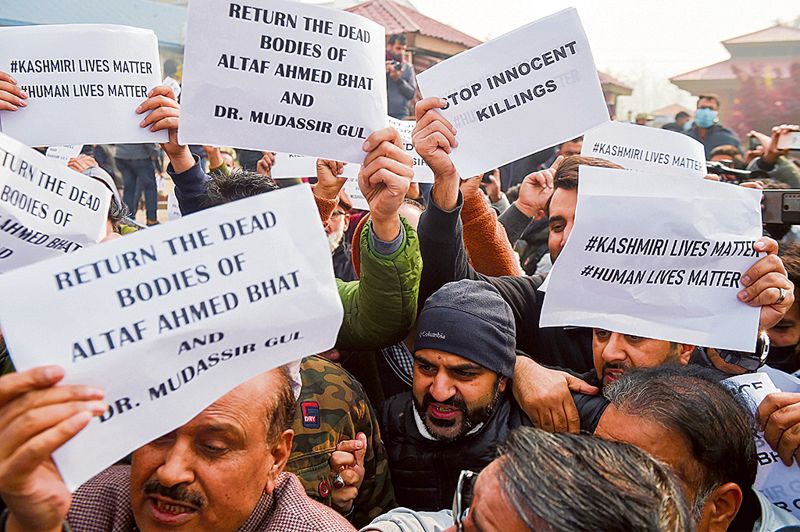 Protesters seek probe into killing of civilians, in Srinagar. PTI

Jammu and Kashmir Lieutenant Governor Manoj Sinha on Wednesday ordered a magisterial probe into the Hyderpora encounter, following which inquiry officer Khurshid Ahmad Shah began proceedings and sought information from the public about the incident.

Hyderpora encounter: Hope we will get justice, says Bhat’s brother

Hours later, the bodies of two civilians killed in the encounter were exhumed for handing these over to families. Shah has issued a public notice, urging people who wish to record their statements in connection with Monday’s encounter in which four persons were killed, to approach his office within 10 days.

Shah was nominated as the inquiry officer by District Magistrate Muhammad Aijaz Asad. “Additional District Magistrate, Srinagar, Khurshid Ahmad Shah has been nominated as inquiry officer… to ascertain facts and circumstances related to the incident and the cause of death,” an order issued by the District Magistrate said. Earlier, Lt Governor Sinha ordered a magisterial probe into the encounter. "A magisterial inquiry by an ADM-rank officer has been ordered into the Hyderpora encounter. The government will take suitable action as soon as report is submitted in a time-bound manner. The J&K admin reiterates commitment to protecting lives of innocent civilians and it will ensure there is no injustice," Sinha tweeted.

The magisterial probe was ordered amid protests by families of three of the four persons killed in the encounter, claiming innocence of their relatives.

A controversy had erupted over Monday's encounter in Hyderpora following conflicting claims about the deceased as their family members contested the police's charge that they were "terror associates".

According to the police, a Pakistani terrorist and his local associate Mohammad Amir Magray, along with two civilians (Mohammad Altaf Bhat and Mudassir Gul) were killed in the encounter in a building in Hyderpora, where an illegal call centre and a terror hideout were allegedly being run.

Family members and relatives of Bhat (building owner), Gul (tenant) and Magray (Gul's office boy) have been protesting against the killings, which they described as “cold-blooded murders”. They are also demanding the bodies so that they can perform their last rites. — TNS