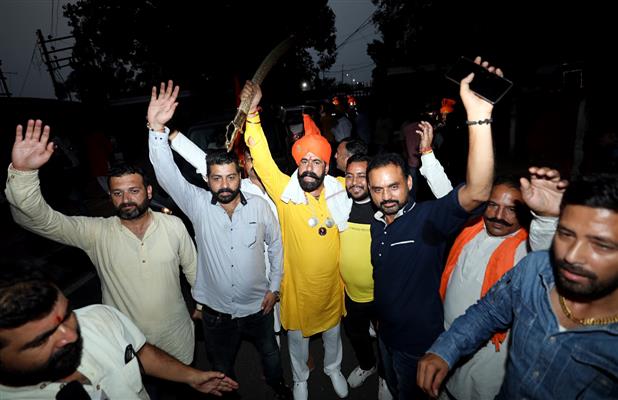 People celebrate outside the Raj Bhavan after the administration agreed to declare holiday on Maharaja's birth anniversary. ANI

The J&K government has decided to declare Maharaja Hari Singh’s birth anniversary (September 23) as a public holiday. A notification in this regard will be issued soon, Lieutenant Governor Manoj Sinha has said.

An official spokesman said the Lieutenant Governor held a meeting with political leaders, members of the Yuva Rajput Sabha, civil society members and head of J&K Transport Union at the Raj Bhavan. Sinha said Maharaja Hari Singh was a great educationist, progressive thinker, social reformer and a towering man of ideas and ideals. The public holiday will be a fitting tribute to his legacy, he said.

A four-member committee was constituted earlier this year on the directions of the L-G to examine the public demand regarding holiday on the birth anniversary of Maharaja Hari Singh, the last Dogra ruler of J&K.

Earlier in the day, BJP leader Devender Singh Rana said Sinha had agreed to declare September 23 as a public holiday in the UT. Several groups had been demanding the honour for the last Dogra ruler.