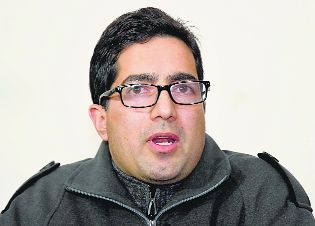 Shah Faesal, the 2010 Indian Administrative Service topper who quit his job and floated a party, has been booked under the stringent Public Safety Act (PSA) which allows detention without trial for up to three months and can be later extended.

The IAS officer-turned-politician has been under preventive detention under Section 107 of the CrPC for the past six months, which ended on February 14. Seven top politicians — former CMs Farooq Abdullah, Omar Abdullah and Mehbooba Mufti, Ali Mohammed Sagar, Hilal Lone (NC) and Naeem Akhtar and Sartaj Madani (PDP) — have already been booked by the J&K Government under the PSA.

Faesal, one of the most vocal critics of the abrogation of Article 370, was picked up from the New Delhi airport on August 14 just before he was to board a flight.

He was brought to Srinagar and placed under preventive detention at Centaur Hotel.

A habeas corpus was filed in Delhi High Court seeking his release which was withdrawn. It is learnt that senior bureaucrats pleaded with Feasal’s family to withdraw the writ, promising that he would be released.

Faesal decided to quit the civil services in protest against “unabated killings” in Kashmir. In March last year he floated J&K People’s Movement but decided against contesting Lok Sabha elections.

Faesal is the first Kashmiri to have topped the Civil Services Examination. His father Ghulam Rasool Shah, a prominent schoolteacher, was shot dead by unidentified gunmen in 2002. Hailing from Kupwara, his family migrated to Srinagar, where he took admission in MBBS. He later cracked the IAS in his first attempt.

Bengaluru: Three students from Shopian, Kashmir, studying at a private engineering college in Hubballi district of Karnataka were arrested on sedition charge for allegedly raising pro-Pakistan slogans and posting a video on a messaging platform. Action has been taken on college management’s complaint. PTI