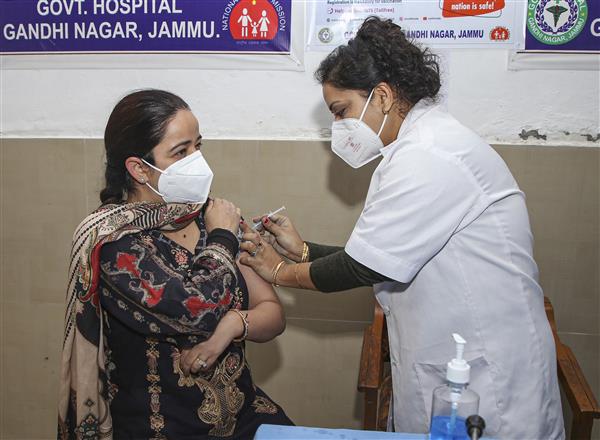 A medic administers Covid vaccine on a doctor in Jammu. PTI

The Covid-19 death toll in Jammu and Kashmir rose to 1,924 on Thursday with one more fatality, while 117 new cases pushed the infection tally to 1,23,764, officials said.

Of the new cases, 42 were from the Jammu division and 75 from the Kashmir division of the Union territory, they said.

Srinagar district recorded the highest 46 cases, followed by 33 in Jammu district. While six districts — Rajouri, Doda, Samba, Poonch, Reasi and Ramban — did not report any new cases, 12 districts had cases in single digits, the officials said.

The number of active cases rose to 1,111 in the UT, while 1,20,729 patients had recovered from the infection so far, the officials said.

One death was reported due to Covid-19 in the past 24 hours in the Jammu region, officials said, adding that the death toll had risen to 1,924. — PTI