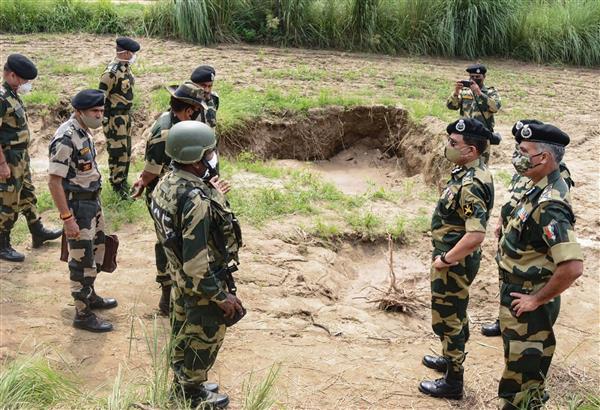 Pakistan is using cross-border underground tunnels to push terrorists into India and drones to drop weapons for them, the chief of Jammu and Kashmir police said Sunday.

Director General of Police Dilbag Singh, however, said the anti-infiltration grid is active and anti-tunnelling operations are underway to scuttle “nefarious designs”.

“Digging of tunnels beneath the IB is part of the nefarious designs of Pakistan to facilitate infiltration of terrorists into this side to step up terrorism,” Singh told reporters in Samba district after inspecting the recently discovered 170-metre tunnel at Galar village along the IB.

The tunnel with a depth of 20-25 feet and originating from Pakistan was found by a BSF team near the border-fencing on August 28.

“I saw this huge tunnel which is almost similar to the one detected in Chanyari in 2013-14. After the Nagrota encounter, we had received specific inputs that infiltration had taken place through a tunnel and was searching for it,” the DGP said.

Three Jaish-e-Mohammad (JeM) terrorists were killed in the encounter in Nagrota in January this year.

“The investigation is on but the ground indicators suggest that the tunnel was used by Pakistan in the past to push infiltrators,” he said but did not rule out the possibility of more such tunnels.

He said BSF and police personnel are searching the area for any other tunnel.

On the recent recovery of sophisticated weapons, including an M-16 rifle, from a Kashmir-bound truck near Qazigund, he said the investigation is going on and it is believed that the arms were airdropped using drones in Samba sector.

Two overground workers of JeM, who were transporting the weapons in a truck, have identified the place in Samba from where they picked up the consignment for delivery to terrorists active in south Kashmir, officials said.

Asked about the possibility of presence of overground workers of terrorists in Jammu, Singh said the region has always been on the radar of Pakistan and it is evident from suicide attacks on military installations in Jammu, Samba and Kathua districts over the years.

“We have made adequate deployment and are taking all necessary precautions to frustrate the designs of Pakistan both along the border and in the hinterland,” he said.

Officials said the DGP reviewed the overall security situation, especially along the IB, in the district during his visit and was also briefed by senior police and BSF officers. — PTI