Aide from Kupwara dies in road accident while trying to flee 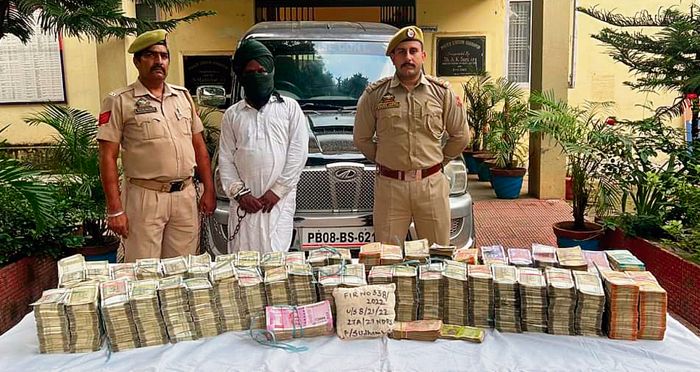 Jagtar Singh, a resident of Tarn Taran in Punjab, with the seized cash in Udhampur. Tribune

In a major success to the J&K Police, a smuggler from Tarn Taran in Punjab was arrested for carrying Rs 1.91 crore along with 250-gm heroin in Udhampur district late on Wednesday evening. A Kashmiri associate of the smuggler died after being hit by a car while trying to dodge the police. The arrest was made when a police patrolling party found the two suspects near the Gole Mela petrol pump moving in a suspicious manner. As per the official information, on seeing the police party both ran towards the main road. “One of them was knocked down by an unknown vehicle and got critically injured,” said ADGP Mukesh Singh.

He was taken to the district hospital from where he was referred to the Jammu GMC. He succumbed to his injuries later. The deceased has been identified as Mukhtiar Ahmed, a resident of Prada Tangdhar in Kupwara of Kashmir.

His accomplice Jagtar Singh, a resident of Pakhopur village in Tarn Taran of Punjab, has been arrested. Cash amounting to Rs 1,91,34,030 and 250-gm heroin were seized from his possession. An SUV bearing Punjab registration number was also seized.

Narco-terrorism angle is being looked into. We can come to any conclusion only after investigation. —Vinod Kumar, SSP

“A case under relevant sections has been registered and an investigation set into motion. Preliminary investigation reveals that both were involved in the narco-trade,” the ADGP said.

Udhampur SSP Vinod Kumar said that as per the initial investigation, it appeared that Jagtar had procured the consignment for Punjab earlier and had come for the payment of the same to Mukhtiar Ahmed. “They had decided to meet at a midpoint so Mukhtiar came from Kupwara to Udhampur. But they were spotted by the alert policemen near their meeting point,” said Kumar.

“The investigation is being carried out regarding the angle of narco-terrorism wherein money is used to fund terrorism in J&K. We can come to any conclusion only after the investigation,” the SSP said. The police are also trying to know if the drug seized from Jagtar had come from Pakistan.