Security beefed up ahead of I-Day 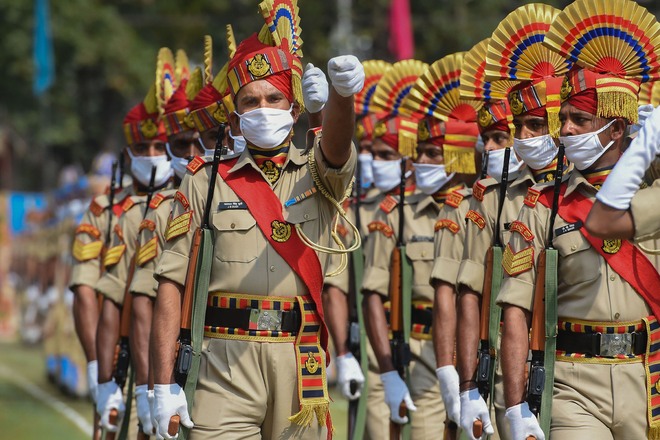 A BSF contingent marches during the full-dress rehearsal for I-Day function in Srinagar. PTI

Ahead of the Independence Day celebrations, security has been beefed up across Jammu and Kashmir, with police and other agencies making additional deployment in the areas along the international border (IB) and the Line of Control (LoC).

Inspector General of Police, Jammu Zone, Mukesh Singh also convened a meeting with his range deputies and the district SSPs via video-conferencing today to review the security measures to be taken in the run up to August 15, and to take stock of the progress of other allied arrangements in view of the prevailing security concerns in the region.

“All the checkposts along the border roads, national highway and other interior highways will be put on high alert round the clock,” said the IGP

Meanwhile, the UT administration has made it mandatory for all officers above the rank of Under Secretaries stationed at Srinagar and Jammu to attend the main I-day functions at the Sher-i-Kashmir Cricket Stadium, Sonawar, and Parade Ground, Jammu, respectively, as part of their official duty.

“Any absence will be with prior permission of their immediate superior. All the administrative secretaries, heads of the departments, managing directors and chief executives of the public sector undertakings are requested to ensure that all officers and officials working under their administrative control, and stationed at Srinagar and Jammu, attend the function at their respective places,” read a circular issued by the government.