Problems related to low visibility will be addressed soon as an upgraded instrument landing system will be installed at the airport by November this year, say official 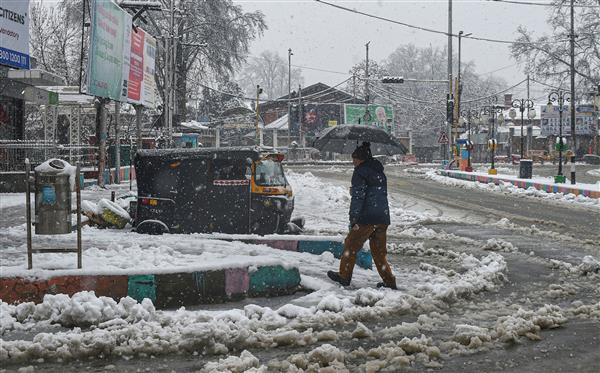 A man walks under an umbrella during light snowfall, in Srinagar, on Saturday, January 8, 2022. PTI

All scheduled flights were cancelled on Saturday due to heavy snowfall that reduced visibility at the airport here, snapping air link between Kashmir and rest of the country, officials said.

The snowfall, which started late in the afternoon on Friday, continued through the day at most places in the Kashmir valley, they said.

“All the 40 flights scheduled to operate at the Srinagar airport had to be cancelled due to snowfall,” an official of the Airport Authority of India (AAI) said.

He said snowfall had reduced visibility to less than 600 metre at the airport.

Problems related to low visibility will be addressed soon as an upgraded instrument landing system (ILS) will be installed at the airport by November this year, the official said.

“The installation of the CAT-II ILS will begin in April 2022 and would be completed by November 2022. Hopefully, we will not face these difficulties next year,” he added.

The official advised passengers to reschedule their flights, which, he said, will be done by airlines free of cost. “The passengers are entitled to full refund if they decide to cancel their journey,” he said.

The air traffic to and from Kashmir has been badly affected over the past few days with a large number or flights getting cancelled due to poor visibility.

The mercury in Kupwara in north Kashmir settled at a low of zero degrees Celsius.

The meteorological office has said significant improvement in weather is likely from Sunday morning, after which it is likely to stay mainly dry over the next few days.

The Kashmir valley is currently under the grip of the 40-day harshest winter period known as ‘Chilla-i-Kalan’ which began on December 21.

‘Chilla-i-Kalan’ is a period when a cold wave grips the region and the temperature drops considerably leading to the freezing of water bodies, including the famous Dal Lake here as well as the water supply lines in several parts of the valley.

The chances of snowfall are the most frequent and maximum during this period and most areas, especially in the higher reaches, receive heavy to very heavy snowfall.