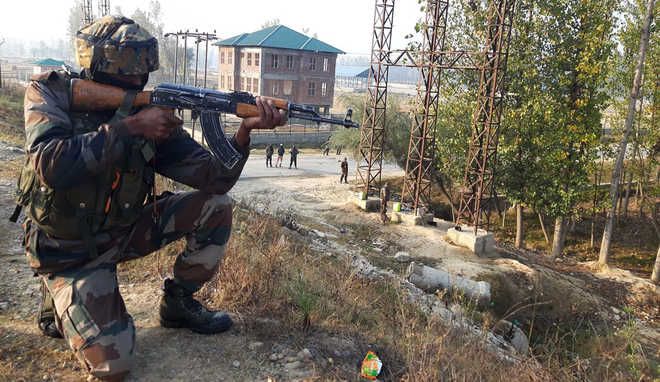 The security forces today neutralised a Pakistani commander of the Lashkar-e-Toiba (LeT) and his two local accomplices in an encounter in Pulwama district. File photo

The security forces today neutralised a Pakistani commander of the Lashkar-e-Toiba (LeT) and his two local accomplices in an encounter in Pulwama district.

A police spokesman said a cordon and search operation was launched on Tuesday night by a joint team of the J&K Police, Army and the CRPF following inputs about the presence of terrorists in Pulwama town.

“Civilians were evacuated to safer places. When the presence of terrorists was ascertained, they were given an opportunity to surrender. However, they fired indiscriminately upon the joint search party, which was retaliated leading to an encounter,” he said.

In the ensuing gunfight, he said, three terrorists of the LeT were killed and their bodies retrieved from the encounter site.

“Besides Aijaz, the other two terrorists have been identified as Javeed Ahmad Rather, a resident of Tahab in Pulwama, and Shahnawaz Nazir Ganie, a resident of Samboora in Awantipora," the spokesman said.

Two AK rifles, a pistol and some incriminating material have been seized from the encounter site.

BSF troopers fired at a flying object near the border in the Arnia sector on July 13 night, an official said. Faced with gunshots, it returned. A search is on and nothing has been found so far.

A major tragedy was averted as security forces destroyed an IED planted by militants under a tree on the outskirts of Damjen village in Kulgam’s Qazigund area, the police have said.