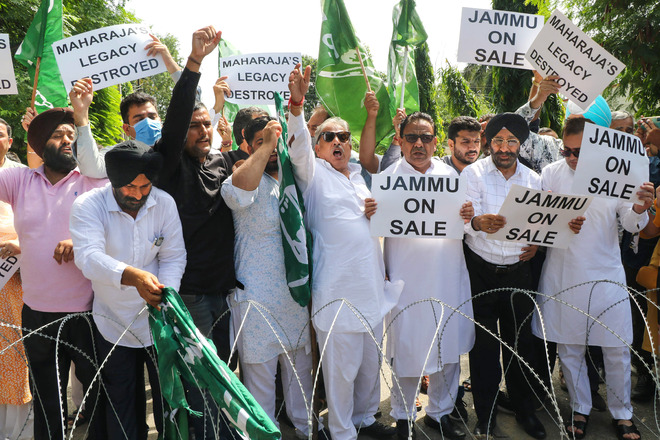 PDP members raise slogans as they protest during a shutdown in Jammu on Wednesday. PTI

Normal life was hit across the Jammu region on Wednesday amid a day-long strike call given by the Jammu Chamber of Commerce and Industries (JCCI) to protest against the alleged “directionless anti-trade policies” of the administration.

The strike, which evoked widespread support from almost all opposition political parties and social groups, remained peaceful with no untoward incident reported from anywhere, officials said.

The work in courts was affected by the strike, which was also supported by the Jammu chapter of the J&K High Court Bar Association.

The main markets in the city wore a deserted look as shops and business establishments including retail chemist shops were closed, while the movement of public and private transport was thin.

Protests and rallies at various places by traders, activists of National Panthers Party (NPP), Peoples Democratic Party (PDP), Aam Aadmi Party and Dogra Front in the city marked the strike, which was the first of its kind in the Jammu province after the abrogation of Article 370 in 2019.

Among other things, the sponsors of the strike are agitated over the scrapping of the ‘darbar move’ by the government without consulting the stakeholders and new excise policy, rendering wine shopkeepers jobless.

Other issues which triggered the strike included the new Geology and Mining policy, restrictions on banquet halls and proposed opening of the Reliance Retail stores chain even as the company on Tuesday evening clarified that the talk of 100 stores being opened in Jammu is untrue.

JCCI president Arun Gupta described the statement of Reliance Retail as misleading and said, “We are all united and will continue our struggle to safeguard the interests of the people of Jammu region.” — PTI