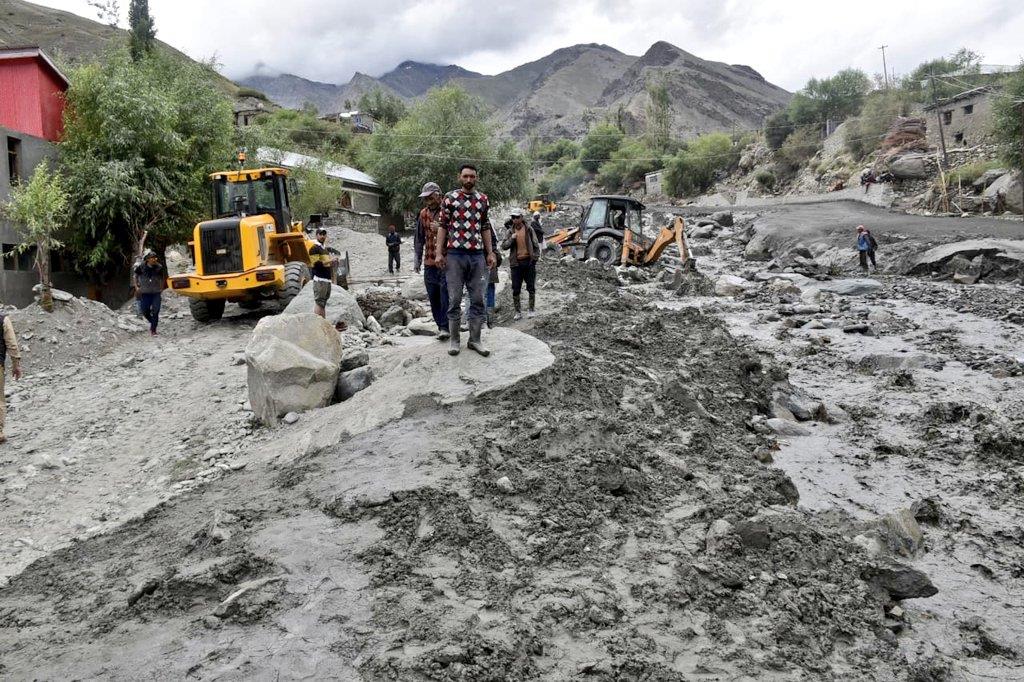 Local residents assess the damage after a recent mudslide in Stakpa village of Kargil district.

Unheard of in the past, massive mudslides in the northernmost Union Territory of Ladakh are not only damaging agricultural fields and houses of people, but also triggering concern among experts who believe changes in climatic conditions are its root cause. Villages on the feet of mountains, especially in Zanskar region in Kargil, are facing the unique phenomenon of mudslides with such intensity that roads are getting blocked and fields filled with pebbles and slush, making cultivation impossible.

Landslides have been occurring for the past 2-3 years, but the one this time was massive, leaving agricultural fields covered with slush.  — Mohammad Ali Shah, Resident of Stakpa village

Areas in Sankoo and Suru valleys bore the brunt of mudslides during the recent downpour.

Experts say it is not the rain but the intense heat in the region that loosens the soil, which flows downhill during rainfall. Melting of glaciers at a high speed due to heat is another apparent reason behind the mudslides.

Mohammad Ali Shah, a resident of Stakpa village that witnessed landslide a week ago, said such incidents had been occurring on a small scale for the past 2-3 years. “But the landslide this time was massive, leaving agricultural fields covered with slush and leaving no opportunity for us to sow crops,” he said.

Barley, wheat, apricot, apple and peach among others are grown in Kargil.

He informed that some people from the village went to the adjoining mountain to check a waterfall (that feeds a stream in the village). “The flow of water from the glacier had increased manifold and it had displaced a large part of the ground where water falls,” Ali added.

Officials of the Jal Shakti department and the Ladakh Autonomous Hill Development Council (LAHDC), Kargil, also visited the villages of Sankoo and Stakpa among others to take stock of the situation. JCBs and other machinery were deployed to clear the fields. In 2010, flash floods in Leh town had caused a major devastation, leaving over 170 persons dead.

Ghulam Haider, Councillor of Stakpa and Umba, says the road connectivity of the area with other parts remained snapped for days due to the landslide. “This was uncommon in the area. We have seen mudslides even in the past, but never such a massive one,” he said, adding that a list was being prepared of the people whose fields and houses were damaged.

Sajjad Hussain, Assistant Professor, Environmental Science, of a local government college said blistering heat loosens the soil and melts glaciers, triggering landslides. “Mudslides have been witnessed in villages along the slopes of mountains. Kargil is witnessing more heat this time. Loosened soil is carried along by glacial or rain water,” he said.

He said that there was no vegetation on the surface of the mountains in Ladakh to stop direct sunray from falling on the soil which loosens it. “This is probably due to the changes in climatic conditions that is triggering such mudslides,” Hussain added.